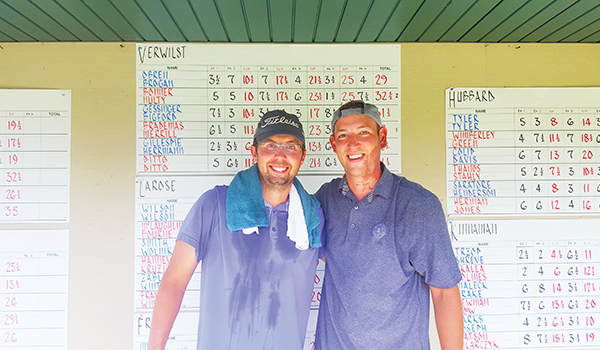 NILES — Golfers battled rain, heat, humidity and each other at the 2019 Orchard Hills Country Club Men’s Invitational that concluded on Saturday.

“This annual event is the signature event for Orchard Hills Country Club every year,” said OHCC member Rick McKeel, who along with partner Steve Wells, won the Horse Race competition. “It is a member-guest event that is played over four days, including a practice round on Wednesday. The teams are flighted by handicap and play round-robin matches within their flight, then the last match is a position round. Flights are named after prominent past members of Orchard Hills Country Club as a way to honor them.”

So what exactly is the Horse Race?

“The Horse Race is a separate event within the invitational and a special tradition at Orchard Hills Country Club,” McKeel said. “Galleries of members and guests’ families come out to watch the event. The event is an alternate shot format. Groups of 12 teams tee off on holes 1, 2 and 3 simultaneously, and the lowest four scores from each hole advance to the next round.”

The event even had a unique tiebreaker.

“Ties are broken by chip-offs, with the closest to the hole advancing. The field of 12 teams then plays hole No. 3 and the top eight teams advance. Hole No. 4, a par 3, is played reducing the field to the final five teams,” McKeel said. “Those teams play No. 9, a par five, along the river, up the hill to the clubhouse, where players and spectators line the green to watch the final hole.”

McKeel and Wells tied Pete Smith and DJ Wolnik with a birdie on the final hole forcing a chip-off.   Wells won the chip-off crowning himself and McKeel as the 2019 Horse Race Champions. Finishing in third place was Dan Schlobohm and Steve Jones.