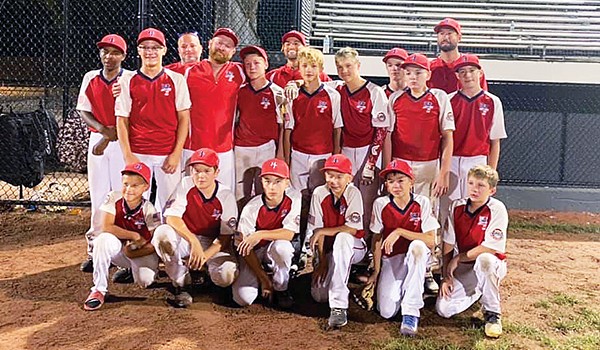 NILES — For the first time in its history, a Howard Township baseball team was one game away from the Cal Ripken World Series.

The Howard 12U All-Stars captured the Michigan state Cal Ripken championship July 7 to qualify for the Ohio Valley Regional in Crown Point, Indiana.

The all-stars reached the consolation finals with a dramatic 7-6 win over Schererville, Indiana, but fell to Vincennes, Indiana in the title game 5-4.

“The Howard 12U All-Star team just returned from an amazing trip to the Cal Ripken Ohio Valley Regional tournament,” said coach Joe Racht. “They made it further than any Michigan team has ever made it and had a legitimate shot at heading to the World Series in some amazing games.”

Howard Township ended up 3-2 at the tournament, beating Germantown, Kentucky 14-4 in its regional opener before knocking off Logansport, Indiana 13-1 in the second game of the tournament.

Vincennes handed the all-star team a 9-6 loss, but Howard Township rebounded to knock off Schererville 7-6 to reach the title game.

In the consolation semifinals, Howard Township and Schererville were deadlocked at 6-6 heading to the ninth inning. Jaxen Racht drove in the game-winning run with a two-strike single.

Howard Township had seven hits compared to five for Schererville.

Dane Asmus was 3-for-4 with a home run in the fourth inning for Howard Township All-Stars.

In the consolation title game, Vincennes scored a run in the bottom of the seventh to pull out the 5-4 victory and a spot in the championship game. Asmus also homered in the opening win over Kentucky.

“Our community would be very proud of them as we have a strong history of local baseball organizations doing well in these types of tournaments,” Racht said.