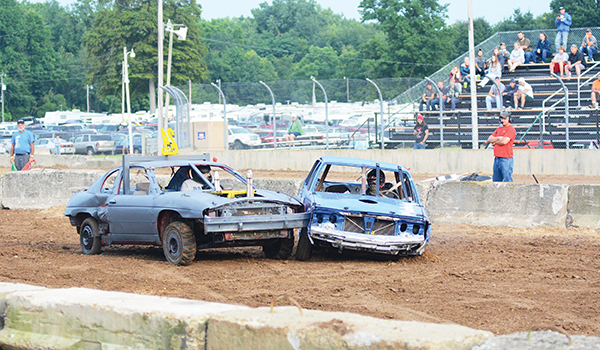 CASSOPOLIS —There are certainties when it comes to the Cass County Fair.

Another certainty is that the grandstands will be filled the night of the demolition derby.

This year, fans of the sport will get a double dose of derby action as the traditional demolition derby gets under way at 7 p.m. July 31 in the grandstands.

The following night, Aug. 1, many of those same fans will be clammering for seats when the Bump-n-Run Off-Road Demo Derby makes its debut in Cassopolis.

Unlike traditional demolition derbies, the Bump-n-Run race is more like NASCAR in that an oval track is set up in front of the grandstands and the cars race a certain number of laps in heat races trying to reach the feature event.

Never has a statement been so true. The entire point of Bump-n-Run is to not only be the first car to complete the number of required laps, but to do so by any means necessary. That means putting the “chrome horn” to the bumper of the car in front of you is not only legal, but probably required to get to the finish line.

TNT Demolition Derby, LLC is the promotor of the event. Owner Todd Sorensen says his company puts on 36 shows a year in both the upper and lower peninsulas of Michigan, along with traditional demolition derbies.

The rules are pretty simple. There is a 10-lap heat race with the winner being the first car to complete those 10 laps. That car then advances to the feature. There will also be a consolation race from each heat, which puts six to 10 cars in the feature.

“We call it a round-robin,” Sorensen said. “We do it for each heat. We have just one consolation race at the end. We have a stock class and we have a modified class. The cars are set up the same way you would a regular demolition derby class.”

There is one difference between the two vehicles. Whereas you build a traditional derby car to be beefy and withstand a lot of abuse, you still want your Bump-n-Run car to have some speed for the racing aspect of the event.

“You can wipe somebody out and win the race or you can just pass him,” Sorensen said. “We don’t want anybody killing each other, but you can bump-n-run to get into first, second or third place. We do not want someone who is a lap or more down taking out the leader, but it does happen. Then they get black flagged.”

Like a traditional derby, if a car dies from contact with another car or due to equipment issues, the car remains on the track and becomes yet another obstacle racers must contend with. If a driver wants to get out before the race ends, a red flag will stop the race long enough for that driver to exit the vehicle.