Bobcats, Bucks bow out of tourney 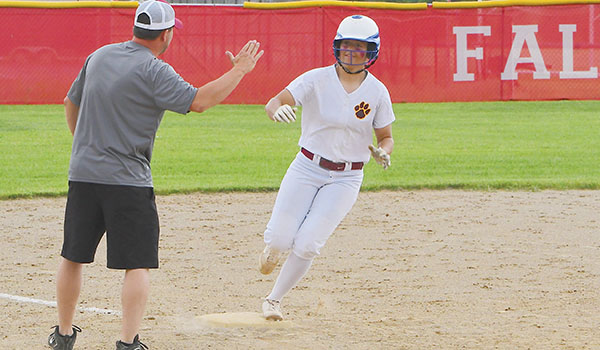 CONSTANTINE — Division 3 baseball fans had to wait out the weather to crown the champion, after the title game was rained out Saturday in Constantine.

Buchanan’s baseball advanced to the final game against Berrien Springs after taking 10-0 win over Constantine in the semifinals.

The Bucks and Shamrocks resumed play at 4:30 p.m. on Monday at Berrien Springs. The game will begin in the bottom of the first inning with one out and bases loaded for the Shamrocks. The game is tied 1-1.

“He came out, threw strikes and just really made the game easy for us,” he said. “When you get a strong pitching performance like what Hoover had today, the team relaxes and we play great on both sides of the field.”

In softball action, Centreville was crowned champion after a 14-2 win over Constantine in the finals. Both teams ended Brandywine and Buchanan’s seasons in the semifinals.

In the first semifinal game of the day, Centreville gave no mercy to Buchanan’s softball team, putting up a 13-2 win.

The Bulldogs lead 6-2 after four innings of play and sealed the deal with seven runs in the bottom of the fifth, which included a grand slam.

“The wasn’t the outcome we thought we would have,” Buchanan coach Rachel Carlson said. “We had a great week of practice and came into this game focused and ready to play. We just made a lot of mistakes defensively and had a lot of pressure early on from Centreville. They came out swinging their bats right away and we were just never able to regroup.”

“I had the pleasure of coaching most of the seniors all four years of high school and they are all great girls who will be sorely missed. It’s always tough when you lose seniors — especially this many and ones you’ve created so many memories with. We wish them all the best.”

In a season that almost never was, Brandywine’s softball players, parents and new coach celebrated the team’s semifinal appearance on Saturday, despite losing to Constantine 8-2.

Head coach Jason Antus spoke to his team after the game, crediting them for never giving up, staying positive and finishing a tough season on a high note.

“We wouldn’t have been here playing this game today, if it weren’t for you girls,” Antus said. “You overcame a very tough start to the season, you gave me a chance, you encouraged other girls to come to join your team. Be very proud of yourselves because I am proud of each and every one of you.”

Antus entered the season shortly after it began and hoped to turn things around for the Lady Cats, who struggled to even form a roster in the beginning.

“My first goal when I came on as coach was to get a full roster, so I told the girls to get out there and find girls who wanted to play,” he said. “They brought friends on board who hadn’t played softball in years. A few of the girls couldn’t even field a ball when they first came on and they ended up making some of the biggest plays of the season and having some of the best batting averages on the team. They shouldn’t hang their heads low after today. They made me very proud and I hope I am able to return next year to start fresh and have a full season with them.”

At this time, Antus has not heard if he will be back next year as the athletic department will make that decision at a later time.

The Lady Cats opened the semifinal game with a quick a 2-0 lead in the first inning. Junior Kennedy Byrd hit her 12th out of the park home run of the season. Unfortunately, that was the only time Brandywine would cross home plate for the rest of the game. Several defensive errors at the hands of the Bobcats allowed the Falcons to rack in eight runs between the second and sixth innings.

With the loss, Brandywine said farewell to three seniors – Nicole Sachman, Kylie Mesecar and Madison Bailey. Antus spoke about each of them after the game.

“Nicole is one of the best centerfielders I have seen in this area in a while,” Antus said. “She has a great batting average — above .500 — and is just an all-around great kid. Maddy (Madison) is a bundle of energy. She always gave it her all and went the extra mile. And Kylie is the only catcher we had all season and she worked her tail off. Even after having her wisdom teeth pulled, she still came out and battled. They were all wonderful to coach this year and we will miss them.”