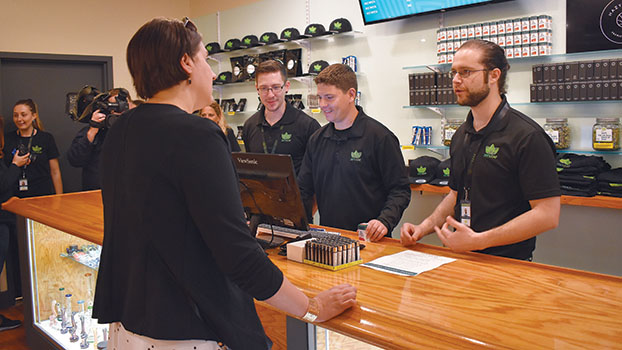 BUCHANAN — When Sara Crouse, 38, of Sawyer, stepped up to a counter inside Zen Leaf Friday morning, the medical marijuana provisioning center’s employees crowded around to watch the transaction.

Crouse, a medical marijuana card holder, was Zen Leaf’s first customer and the first purchase from a medical marijuana provisioning center within a 65-mile radius to date. For $30, she bought pre-rolled joints and edibles, in Sativa strains called White Widow and Razzmatazz. The edibles came in the form of watermelon-flavored gummies.

“This is exciting,” Crouse said. “I’m very honored that they gave me an opportunity to be here and be part of this. I wanted to make sure that I’m shining as much of a positive light as I can. I believe there’s so much opportunity here and so much help that can be given to people in the community.”

Zen Leaf hosted an open house last weekend to introduce the community to their budding business. Because the medical marijuana product had not arrived yet, anyone was welcome to tour the provisioning center for a sneak peek.

On Wednesday, the business hosted a soft opening, followed by a grand opening on Friday. Crouse volunteered to be photographed and to share her story. After she made her purchase, dozens of other medical marijuana cardholders visited the provisioning center to purchase medicine, too.

Crouse was diagnosed with serve Crohn’s Disease in 2016 — an inflammatory bowel disease. Her intestinal wall ruptured twice. The second time, the rupture put Crouse in a three-day coma.

“Really, truly, I’m lucky to be alive,” Crouse said. “It’s really important that I speak to the medicine side as well. Man-made medicine saved my life.”

After five surgeries and a laundry list of medicines, including fentanyl, Oxycontin, Vicodin, Percocet, plus Ativan to assist in sleeping, Crouse began to experience side effects from the drugs. She said she was taking probably 50 pills a day.

In 2017, she became a medical marijuana card holder.

“When I started using [marijuana] in the evenings, I found that it helped with my inflammation and my discomfort,” Crouse said.

Crouse said she was able to eliminate the majority of the medicines she was taking, except for a biologic medication, which she has to inject every two months.

When Crouse heard about Zen Leaf opening, she said she got connected with owner Billy Breen. With her publicized first purchase Friday, she said she wanted to fight the image that is still attached to some medical marijuana users.