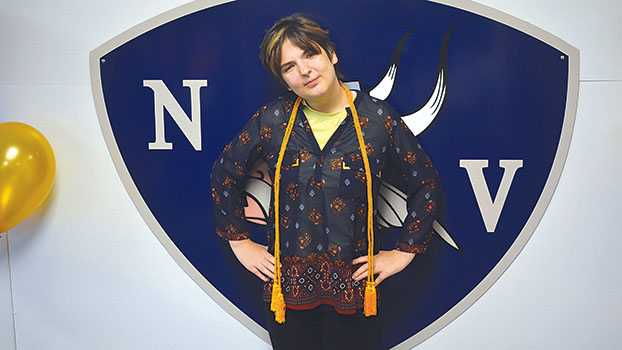 Faith Fox once had a fear of public speaking.

“I’ve freaked out before,” she said.

This Thursday, Fox will graduate from Niles High School with honors and a public speaking award.

Fox placed third and received a silver rating at a regional prepared public speaking leadership development event earlier this spring at Van Buren Tech. The event was hosted by the National FFA Organization, known previously as Future Farmers of America.

The contest requires FFA members to prepare a six- to eight-minute speech on any topic relating to agriculture and present it in front of judges. The FFA judges will then give feedback on the performance and ask follow-up questions.

Fox chose to write about animals and animal welfare. She touched on numerous topics, from the behaviors of animals to PETA to how animals have coping skills similar to humans.

While it was not her speech that rid Fox of her public speaking fears — a choir solo was — she said it gave her encouragement to try out.

“I wanted to challenge myself because I felt like I could do it,” she said.

Fox’s agriscience teacher, Cheryl Rogers, gave her encouragement, too, she said. Fox first found out about the contest from a poster on one of Rogers’ classroom cabinets.

A quote from Rogers stuck with Fox during her speech-prepping: “Giving up is not an option.”

Fox said she had to write her speech on many postcards and repeat it many times. Once the day of the contest came, she then had to wait for an hour before she was called up to give her speech.

“The toughest part about practicing the speech was that I was going to freeze,” she said. “I freeze up normally when I speak. I get nervous. I speak really, really fast.”

The judges noticed she was nervous, Fox said. They said she spoke fast, so much so that her speech was a minute shorter than the required time. Fortunately, the judges cared more about content than time, and they loved her content, she said.

The prepared public speaking contest has state and national levels. While Fox just missed the cut to make it to the state event, she said she and others are still proud of her accomplishments.

“Mrs. Rogers was proud of me that I took the challenge, I overcame my fears,” she said. “And the judges taught me things that I could do better.”

Fox’s last day of school was last Wednesday. It was also the day her FFA membership expired. While she’ll be soon be an alumna of two different developmental organizations, a vegetable is keeping her connected to them, at least until the fall.

She’s taking part in a local FFA pumpkin contest. The owner of the heaviest pumpkin could receive a cash prize.

Using her knowledge from the school’s agriculture team, Fox chose a variety of pumpkin, the Hoornstra, she believes will be the heaviest. Once it’s cross-pollinated, she plans to name it Mario.

Right now, though, she just wants to graduate.

“I’ve been waiting for this forever,” she said.