A guide to this weekend’s Memorial Day events 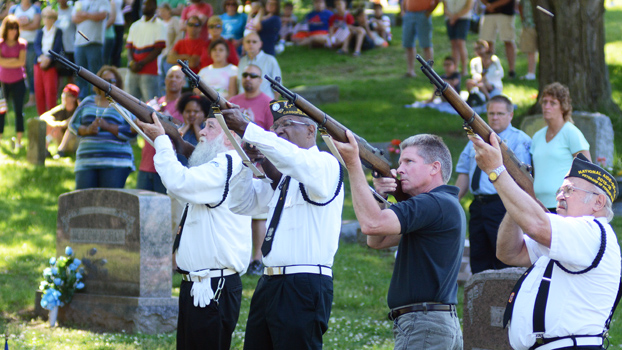 Memorial Day is on Monday, which means that festivals and parades will soon take place. Memorial Day is also a time to honor the country’s fallen soldiers. Many cities will be providing a Memorial Day ceremony to remember those who have died in the line of duty.

Below is a round-up of some Memorial Day events will happen in the area.

Niles’ annual Memorial Day parade will begin at 9 a.m. Monday, starting at the corner of Main Street and Second Street. It will end on Silverbrook Street.

Floats, bands, clowns and more will be available at the parade, which is sponsored by the American Legion LaRue Post.

The Point Man of Niles will host In Honor of our Veterans from 11 a.m. to 1 p.m on Monday at Hope Community Church on Lake Street.

This is a free event that will kickoff events of the Out-Post, an outreach center for vets and their families. The event is meant to honor veterans and their families while having fellowship, food and educational opportunities, according to Out-Post.

Dowagiac’s annual Memorial Day parade will take place at 11 a.m. Monday, starting at City Hall on Front Street and ending at Riverside Cemetery on Riverside Drive. The parade is hosted by the Masons of Peninsular Lodge #10.

A half-hour before the parade, a memorial ceremony will be held in front of City Hall and will include guest speaker Kevin Conklin, judge advocate for the State of Michigan Veterans of Foreign Wars, or VFW.

Conklin joined the United States Army Military Police Corp in 1989 and has been employed by Michigan State Police since 1995. Conklin currently serves as a detective sergeant with the Fifth District Headquarters Fugitive Team, which serves all of southwest Michigan.

After the parade finishes at Riverside Cemetery, VFW 1855 will conduct a memorial service.

Following the parade, performances will be made the by Dowagiac High School and Kalamazoo bagpipe bands.

Immediately following, a ceremony at the Oak Ridge Cemetery honoring the area’s fallen veterans will be hosted. After the ceremony, the American Legion will offer food and refreshments for those who participated in the parade and ceremony.

Marvin Pruett, parade chairman, has organized the Memorial Day parade for the last 36 years and always looks forward to it.

“We get a good crowd here every year,” he said.

The Cassopolis VFW will host the area’s annual Memorial Day parade at 10 a.m. Monday, starting at the VFW building on Front Street.

The Cassopolis High School band and robotics team will participate in the parade.

Following the parade will be a ceremony at Prospect Hill Cemetery on Cemetery Street. After the ceremony, the VFW will offer lunch to veterans and their families.

“Every year is fun for the community and brings remembrance,” said organizer Chris Bergen.

Edwardsburg’s annual Memorial Day parade will be from 11:30 a.m. to 2 p.m. Monday, at Gunn Park on Lake Street. The event is hosted by the Edwardsburg Area Chamber of Commerce.

A festival at Gunn Park will begin at 2 p.m. Live music, food, crafts, activities for children and more will be provided at the festival. The festival will also have vending booths.

Activities such as a bounce house, cake walk, dunk tank and baseball throw competitions will be available.

During the festivities, Hamilton and Lake Streets will be blocked off for vehicles but will be open to pedestrian traffic.