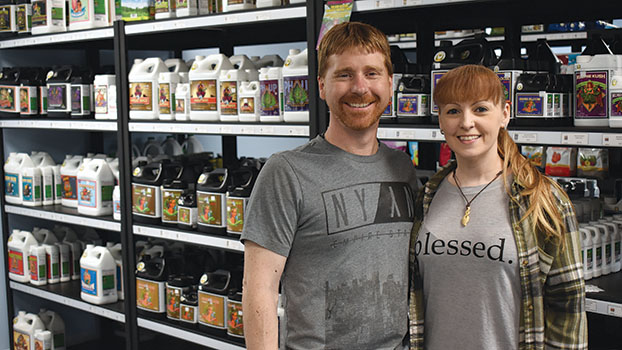 NILES TOWNSHIP — When recreational marijuana was legalized late last year, business owners Matt and Renae Johnson began to see an uptick in business at their LED light and gardening shop.

With more customers visiting Lush Garden Supply Center, formerly called Lush Lighting, Matt and Renae felt they had the financial security to move their business to a bigger location.

Lush Garden Supply Center moved from 1964 S. 11th St. to 1950 S. 11th St. in Belle Plaza about two weeks ago. While just a couple of doors down from their former location, the new storefront is more than double the former space at 4,000 square feet, with the possibility of additional expansion room.

The location includes a warehouse area, where customers can move free freely from shelf to shelf to stock up on fertilizers and soil in a “Costco-style,” Matt said. A bay door in the back of the warehouse area also allows people to pull up to load their car. There is also a conference room, where Matt and Renae can provide consultations to customers.

“[The motivation to move was] more space for more products,” Matt said. “With the recreational [marijuana legalization] there’s more demand for these types of products. We just try to keep up with that demand.”

Lush Garden Supply Center is a retail store that sells grow lights, soils and plant nutrients, as well as other garden materials and carnivorous and exotic plants. The business also creates flower arrangements. Since the approval of Proposal 1, which legalized adult-use marijuana, Matt and Renae said the store has seen a lot more marijuana home growers visiting the store. However, Renae also noted that medical marijuana growers had been customers for years, too.

For recreational use, the state permits up to 12 plants for personal use in one’s home. Medical marijuana caregivers can grow up to 72 plants. While Lush Garden Supply Center does not sell marijuana seeds, they do sell marijuana plant starter kits, which have been a popular pick by customers, Matt said.

“They come in and say, ‘I want to start.’ ‘Where do I start?’” Renae said. “We don’t have the actual product … but we can give you your starter soil, your starter pots, the nutrients you’re going to need.”

“You have to see the opportunity in order to take the risk to make the investment,” Matt said. “If we didn’t see the increase of business, it would have been difficult to justify spending the investment.”

With the business finding a new home with room to grow, Matt and Renae said they hope the space will make it easier for customers to navigate the store.

The family-run business became incorporated in 2012 and opened in Belle Plaza two years later. Renae said one of the business’ missions is to offer organic options for gardening.

“We are trying to give a healthier, more organic alternative to Monsanto and Round Up,” Renae said. “We have more organic products than you’re going to find at Lowe’s.”

Next month, Matt and Renae said they hope to host a grand opening celebration. Growing and adapting to the market is part of being successful in business, they said.

“We’re always improving, always upgrading,” Renae said. “If Apple stopped at iPhone 1, what would it be?”