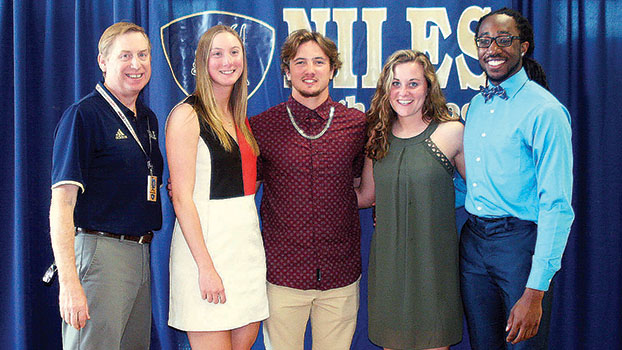 NILES — As the end of the 2018-19 school year closes in, Niles honored its athletes at its Senior Banquet held recently and hosted by the Niles Athletic Boosters.

Da’Quan McClean won the Joseph Whitwam Award, which is given each year to a senior displaying the best sportsmanship. The award is voted on by the varsity coaching staff.

Nominated along with McClean were Terris Frick and Cole Simpson.

McClean is a three-sport athlete for the Vikings and finished second in high jump at the Division 2 regional Friday night. He carries a GPA of 4.10 and is a member of the National Honor Society.

“He embodies what it means to be a Niles Viking,” said Niles athletic director Jeff Upton. “He cares deeply for his teammates, peers, school and community. What his coach admired most about him was his work ethic and discipline. Effort was never in question in the classroom, during practice or games.”

Also nominated for the award were Trystin Schlutt and Cassie Klingerman.

Altergott is Niles’ class valedictorian with a GPA of 4.33. She is a member of the National Honor Society and Student Council.

“She always put others before herself, and one of the first ones to lift up the team after a loss,” Upton said. “She also leads by example in celebrating a win with her team. Her heart is big for her opponents when they lose, someone is hurt, and she also recognizes outstanding plays, even from her opponents. She deserves to win this award because of her attitude, leadership and commitment.”

The Ed Weede Award is given out to the Most Valuable Senior boy and girl.

Simpson was selected as the award winner.

Simpson is a three-sport athlete who competed in baseball, football and wrestling.

“He is a good leader that has the ability to raise the level of play of those around him,” Upton said. “He is also a good teammate and is positive and encouraging while able to blend in with those around him. He has developed into a very good athlete in multiple sports and grow in maturity both on and off the field, and into a leader of the schools and student body in general.”

His advice to freshmen is “give everything you’ve got for four years because it goes by fast.”

Myer is a three-sport athlete who has earned SMAC All-West Division honors in basketball, golf and softball. She was also All-Region in golf back-to-back years and will attend Olivet College to continue her athletic career on the golf course.

“She spends countless hours in the community feeding the less fortunate through her church community food truck,” Upton said. “She defines sportsmanship as being respectful no matter the outcome.”

Her advice to freshmen is “try your hardest and if there are team camps, go to them and improve.”

Her sister Kylee won the Ed Weede Award in 2015.

DOWAGIAC — It was not the best of nights for the Dowagiac sports teams against Wolverine Conference foes. The Chieftain... read more