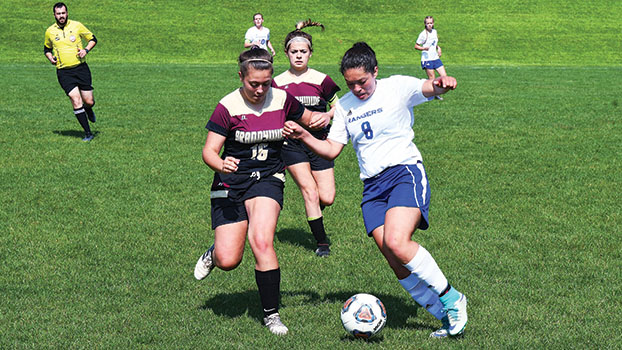 Brandywine’s Ivy Herrera (left) and Cassopolis’ Bianca McGee battle for a ball during the semifinals of the VanDenBerg Invitational Saturday. (Leader photo/KELLY SWEENEY)

NILES — In a rematch from the first game of the season, Brandywine hosted Cassopolis in the opening round game of the VanDenBerg Invitational Saturday morning.

Even though the Rangers defeated the Bobcats 5-1 to advance to the finals at Niles High School, the game and the score were very different from the 7-0 score in late March.

“We have come a long way in the past two months,” said Brandywine Coach Caleb Adams. “We are a very young team and we have started to come together. Our chemistry is great and girls are having fun.”

Much of the first half went back and forth until the Rangers’ Katelyn Waldschmidt released Angel Gary on a breakaway. Gary’s shot was partially blocked by the Bobcats’ goalkeeper Gabby Inman, but not enough to keep it out of the back of the net.

Inman kept the score close after saving shots from Gary and Tristin Gless in the 35th and 40th minutes respectively.

In the 45th minute, Brandywine freshman Olivia Laurita crossed the ball to Ava Doctor. She was able to get the ball past Rangers’ keeper Ariana Cooper to tie the match at 1-1.

But 30 seconds later, Gary was taken out in the penalty box and Aysia Conley put the penalty kick away.

From that point on, Cassopolis never looked back.

Gary would score her second goal in the 53rd minute and complete her hat trick in the 55th minute on a shot that went in the upper right corner.

Conley’s threw ball to Bianca McGee in the 57th minute deflected off Inman and into the goal to solidify victory for the Rangers.

Inman finished with seven saves and Cooper had five saves.

Earlier in the week, Buchanan and Brandywine played a tough game that saw the Bobcats win 2-1.

Brandywine would win again in the VanDenBerg Invitational consolation match, this time by a more convincing score of 4-2.

The first shot of the game belonged to Laurita in the third minute, and she would follow that up with an assist for the first goal of the game in the ninth minute. Bailey Seniff had the goal.

Doctor scored off a deflection in the box to make the score 2-0 in the 15th minute, but just like the first game, Brandywine gave up a penalty kick directly after a goal in the 16th minute.

Buchanan’s Scotland Philip made the penalty kick and cut the Brandywine lead to 2-1 halfway through the first half.

Alysa Adamczyk (27th minute), and Krishna Devdhara (29th minute) added on the to the Bobcats’ score.

Brandywine continued to pour on the shots throughout the second half, but none could find the net.

Philip added her second goal in the closing seconds of the game.

Inman finished with three saves in the consolation game, and Alexa Burns had eight saves.