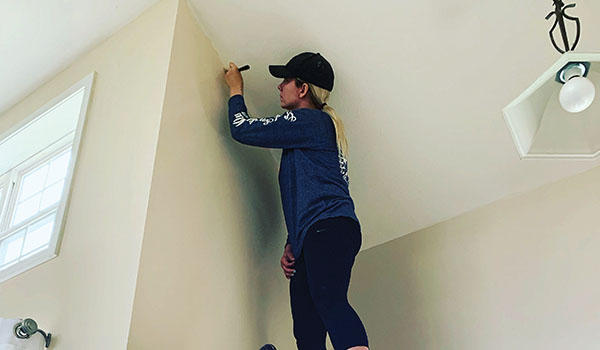 SOUTHWEST MICHIGAN — Victoria Knight, of Niles, was 2 years old when she picked up a paintbrush and started helping contractors re-stain her parents’ deck.

It was one of many indicators that Knight has a knack for creating things with her own two hands. This passion motivated her to work in the construction field, despite it being a male-dominated industry.

“I knew I was not supposed to be in that traditional work setting,” Knight said. “I was not meant to be in the office. I’ve always wanted to build things, and I’ve always been curious about what’s behind the wall.”

Knight has transformed her lifelong love for construction to create a contracting company called Hard Hats & Heels LLC. The business opened at a limited capacity in March, offering handyman work, painting, building a deck, small remodels and drywall. Knight expects to ramp up services in June and serve northwest Indiana and southwest Michigan. Customers can contact her through the business’ Facebook page at facebook.com/Hardhatsandheelsllc or by calling her at (269) 635-4425.

The business’ focus is creating energy-efficient homes, green building, affordable living and “radical styles,” like the creation of tiny houses.

“[It’s] taking a step back from building these magnificent, huge houses and let’s make more simple living and more affordable for people,” Knight said. “[So that] they’re not having to worry about a huge mortgage.”

Knight graduated from Southwestern Michigan College with an associate’s degree in construction trades and green technology. She is green building-certified, which means she has knowledge in utilizing solar panels and creating houses that use less material but can save more energy. Knight is currently working on her builder’s license, too. She said she expects to get the license before her business becomes fully operational in June.

Outside of the classroom, Knight said she learned much of her construction trade knowledge working in the field for Habitat for Humanity in Elkhart.

“I gained a lot of the building techniques that I’m applying right now,” Knight said.

Knight and her boyfriend, Matthew Rudlaff, are the only employees of the contract business at this time.  They both also sell real estate for Century 21 Affiliated.

In today’s construction trade industry, Knight does not see many women in the field. By starting her business, she hoped to not only follow her dreams but show that construction is also a trade for women. This was the inspiration behind her business’ name, Hard Hats & Heels.

“It’s a very empowering, but so intimidating kind of business to run,” Knight said. “You are in a male-dominated field [so it feels great to say I’m] doing it.”

When she opened her business, she said she got an excited response from several women, glad to see her in the field.

“I get a lot of women that are like, ‘oh my god, I love your business name,’” Knight said. “But then I get a lot of men laughing.”

Knight said she finds that the negative feedback is just fuel for motivation.

“I want to be able in a sense to prove people wrong, but in the humble way of helping the community,” Knight said.

One of Knight’s favorite aspects of the industry is creating signature work, tailored specially to her customer, whether it is building a deck or crafting a uniquely designed playhouse for children.

In addition to building her business, Knight said she hopes to help other people get excited about projects around their house by creating informational blogs.

Knight said she most looks forward to helping customers transform their house into a home.

“Building the relationship with the customers is entirely important,” Knight said. “You want them to be happy and stress-free during the process.”