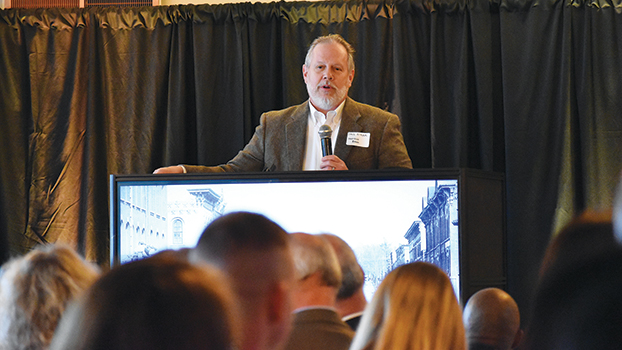 Dave Eifler, the market president of Horizon Bank and chamber board member, addresses a crowd during the chamber’s anniversary luncheon and awards ceremony Tuesday at the Grand LV. (Leader photo/KELSEY HAMMON)

NILES — The Greater Niles Chamber of Commerce celebrated its 100th anniversary Tuesday and looked to the future by recognizing local leaders who have helped the city and its businesses to flourish.

The milestone was commemorated with the Greater Niles Chamber of Commerce 100th Anniversary Luncheon and Awards Ceremony. Matt Malone, a radio host for 97.5 Y Country, helped to lead the event and addressed the more than 100 people that packed the Grand LV. At tables decorated with fresh flowers, people ate lunch catered by Katharos Catering and celebrated those dedicated to their community.

“We made the decision that while both of our organizations were doing great work individually, we could do a lot more by merging our two resources together and have one stronger economic development force in the community,” Weber said.

An important part of the chamber’s past and future are the community leaders and business owners it serves, chamber officials said. With this in mind, they presented awards to those who share a passion for bettering Niles.

The following people were awarded:

2019 Volunteer of the Year Award — This award was presented to Sandy Whitmyer. Known for her many community endeavors, Whitmyer serves on the Niles DDA Main Street board, Design Committee and the chair of The Promotion committee. Since 2012, she has been the president of the Niles Art Association.

2019 Chamber Ambassador of the Year — This award was presented to Marci Taylor. Since 2005, Taylor has served the chamber’s Ambassador Program — a group of business professionals and community leaders who volunteer to represent the chamber. Taylor is the chair of the program and also serves as the Ambassador Coordinator.

Young Professional of the Year — This award was presented to Muta Mwenya and was intended to recognize a community leader between the ages of 21 and 39. Chamber officials said Mwenya was recognized for innovation, professionalism, and assiduousness in his career. He is perhaps best known in the community as the pastor of Relevant Church. Under his leadership, the church has grown its congregation. Mwenya was also pivotal in reviving the former Top Heavy Coffee shop into Atomic Bean Coffee.

Community Leadership Award — This award was accepted on behalf of Weber to recognize the work of the YMCA of Southwest Michigan. Chamber officials said the YMCA was selected due to the organization’s emphasis on providing fitness as well as social wellness to the community.

2019 Business of the Year — This award was presented to Stephanie Reno, the owner of SLR Pilates. Reno opened her business in 2014 and has cultivated a customer following throughout her time in downtown Niles. This summer, she is preparing to expand her business and open a 24-hour gym.

Reno expressed gratitude for receiving the award and emphasized her mission at SLR Pilates.

“Our goal from day one was to create a space where everyone felt at home. … A space where people could heal mentally and physically. A space where commitment to a healthy lifestyle became the norm,” Reno said. “I am extremely proud to say that’s the culture we have created.”

She also recognized Nicole Kellogg, who helped to form her team when the business was getting its start.

The chamber also paid homage to people they identified as “key members” in the organization’s outreach. This included Randy Hendrixson, former interim director of the chamber; Tyanna Weller, former executive director, Ronald Slather, also a former executive director and Jeff Rea, the president and CEO of the Greater Niles Chamber of Commerce. Each person named was presented with a picture of the city of Niles.

Tuesday’s celebration also included a Fireside Chat with Richard Studley, the President and Chief Executive Officer of the Michigan Chamber of Commerce.

Finally, Dave Eifler, the market president of Horizon Bank and chamber board member, closed the event. Eifler said he could not wait to see what is next for Niles.

“One hundred years seems like a long time and it is, but I’m really looking forward to the next 100 years,” Eifler said. “I look around town as well, and we have other projects we are working on diligently. It’s just a combination of people trying for 100 years to put things together. We have and will continue to do so.”