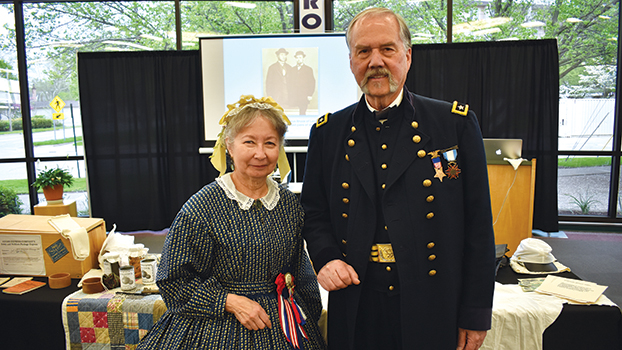 From left, Faye and Ted Chamberlain are dressed in Civil War-era attire Thursday at the Niles District Library. The costume was part of Faye’s presentation on Civil War care packages for a free spring history series. (Leader photo/KELSEY HAMMON)

NILES — In a black and white drawing, Civil War soldiers are depicted swarming a care package in a wooden box. Gleefully, they hold up cookies and pairs of socks like they are coveted prizes.

The artwork and story behind it were among the items discussed during Faye Chamberlain’s presentation, Boxes for Civil War Soldiers: Comfort From Home.

“Soldiers were happy to get anything from home,” Chamberlain said. “As you can imagine, settlers had some of these things, but they were expensive, and soldiers did not make a lot of money, and sometimes their payroll was delayed.”

The presentation took place Thursday at the Niles District Library and was part of the Spring Local History Series, a collaboration between the library and history center. The event was free and open to the public and drew more than 30 people to attend.

Chamberlain is a Civil War reenactor. She portrays Fanny Chamberlain at a variety of history events, often accompanied by her husband Ted, who plays General Josh Chamberlain.

During the presentation Thursday, she wore a blue hoop-skirted dress and lace cap to give her audience a sense of living history. On a display table, those who attended could view examples of care package items.

Chamberlain’s presentation on care packages sought to look outside the Civil War’s battlefield and inside the care packages to see what the items revealed about life as a soldier on the front lines between 1861 and 1865.

“If you really want to understand the war, reading private notes and diaries will give you a much, much better understanding of what the soldiers experienced,” Chamberlain said.

Across the county, groups of women rallied to sew mittens, scarves and socks for soldiers. While today’s world has dating applications that can connect strangers and kickstart a romance, in the Civil War-era, Chamberlain described how a young woman might use a knitted pair of socks or a quilt to help find an eligible bachelor.

“Here’s a note that was tucked into one [pair of socks],” Chamberlain said. “It says, ‘dear boy. I have knit these socks expressly for you. How do you like them? How do you look and where do you live when you’re home? I’m 19 years old, of medium height, slight build, blue eyes and fair complexioned. If the recipient of these socks has a wife, will he please exchange socks with some fellow not so fortunate?”

The relief that care packages provided were best captured by the way Chamberlain described camp life. Marching soldiers could carry only one pair of clothes because of the supplies and ammunition weight that they had to tote around. As a result, their clothing would quickly become dirty and sometimes lice-infested.

Union soldier John Woodland wrote to his family after the Battle of Gettysburg describing this unpleasant situation. The letter, dated July 5, 1863, was read aloud during the presentation.

“I have escaped unhurt through the most desperate battle of the war,” Woodland said. “My health is good, but I feel unpleasant on account of not having a clean shirt for 24 days. I suppose that accounts for the itching sensation I have.”

Chamberlain’s accounts were a reminder of how precious access to essential commodities was for soldiers. After days of marching, sometimes soldiers’ provisions began running low, and they were usually left with nothing but tack – a dense, dry cracker and salt pork, Chamberlain said. To help with the monotony, they might break the tack into pieces and fry it with the drippings from the salt pork, but the tasteless cracker and greasy fat left a lot to be desired, she described.

Another vital supply was caffeine. According to Chamberlain, an average Civil War soldier consumed 36 pounds of coffee a year.

“Nobody could soldier without coffee,” Chamberlain said. “They would drink it during long marches, after marches and even when they were on patrol.”

A key player in distributing care packages was The Adams Express. As Chamberlain explained, Alvin Adams was a grocery store owner who had fallen on hard times and lost his business. With nine children to support, Adams decided to form a new business delivering small packages for businessmen in the area called The Adams Express. When the Civil War began, Adams’ company was one of the primary entities delivering packages to Civil War soldiers. During the war, the company transported the boxes and also brought the bodies of the dead back to their families.

As she brought her presentation to a close, Chamberlain said she hoped the audience learned something new.

“I hope that you enjoyed this war history from a slightly different perspective, and I hope you enjoyed some of these stories,” Chamberlain said.