Volunteers advocate for people to donate to Pennies for Patients 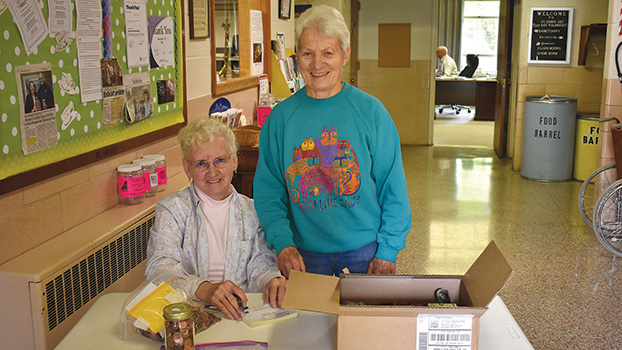 Oftentimes, it is the efforts of local advocates that help the nonprofit to garner more support. Hein and Schmidt were one example.

By 11:30 a.m., Hein and Schmidt had taken in a few donations, but were waiting for the lunch crowds to bring in the bulk of the proceeds, they said.

Schmidt and Hein have volunteered for the fundraiser for the past three to four years. As a member of the St. John’s United Church of Christ, Schmidt helped the nonprofit to have a Niles drop-off location inside the church. Before Schmidt’s help, Hein said Pennies for Patients did not have a home and was instead stationed at a booth on a sidewalk downtown.

“[Schmidt] is the reason why we are here, or we would still be sitting down on the sidewalk,” Hein said.

Schmidt said the church provides a place for a variety of fundraising effort, so taking on one more efforts that helps local cancer patients just made sense.

Schmidt also rallied the support of St. John’s Church congregants to donate to the cause. She said they keep a jar out to collect donations year-round. On Thursday, the church members’ efforts were made apparent by a box stuffed with shiny pennies.

Hein works in the office of the Berrien County Cancer Service, so she has seen firsthand how the nonprofit’s work benefits local people with cancer.

“We have a loan closet with wheelchairs and transport chairs and bathtub seats. We have nutrition and prosthetics,” Hein said. “They loan it for nothing. That’s great that we [the Berrien County Cancer Service] does not charge anything. Everything is free.”

“I think the services they provide, like the wigs, are things that people could not afford,” Schmidt said.

Last year’s Pennies for Patients raised $22,322.37. This year, Nancy Church, the president and CEO of Berrien County Cancer Service, said she hoped to see the fundraiser collect at least $30,000 in commemoration of the fundraiser’s 30th anniversary.

The Berrien County Cancer Service is located at 3900 Hollywood Road, St. Joseph. Those interested in donating can visit bccancerservice.org.