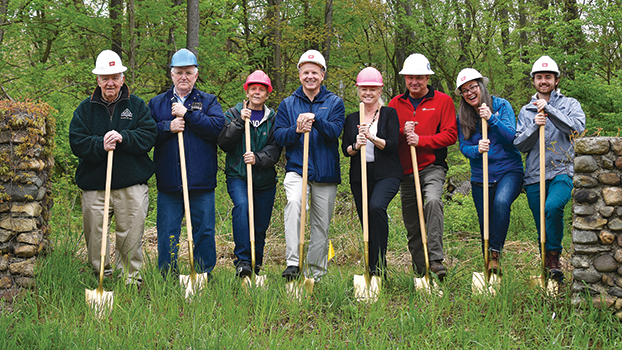 NILES TOWNSHIP — The tranquil woods at Brandywine Creek Nature Center will soon be a hub of activity as construction on phase two of the Indiana-Michigan River Valley Trail begins after years of work.

Wednesday morning, the Niles Township Parks Commission and engineering firm Wightman celebrated the momentous occasion by hosting a ground-breaking ceremony on a section of the trail near the historic Grist Mill pillars. Participants donned hard hats and dug into the ground with gold-painted shovels.

Jill DeLucia, chairwoman of the parks board, said it felt great to kick off the construction phase of the project.

“This is the final gap that connects all these communities,” DeLucia said. “Finally, we are there.”

For the next three months, construction crews will work to fill in an approximate 1.05 mile stretch of trail between the Brandywine Creek Nature Center and the city of Niles. The trail will connect with the city’s section of the Indiana Michigan River Valley Trail, which currently stops at Fort and Third streets. Closing the gap will also connect Niles Township with Indiana’s trail to the south. When complete, the path will be 34 continuous miles long. The paved trail will also be ADA compliant.

DeLucia said she expects the township’s portion of the trail to help people get in touch with southwest Michigan’s natural landscape.

“This is going to be a really pretty part of the trail,” DeLucia said. “The other side is pretty flat with a lot of wildflowers. This will be different because it will be wooded. It should be very scenic.”

The ground-breaking was initially scheduled for last week, but rainy weather delayed the ceremony and construction by about two weeks. Suzannah Deneau, a Wightman engineer, said she does not expect the delayed start to have much impact on the trail’s completion, which has been targeted for October. Project officials advised those who travel S. Third Street that there may be intermittent construction delays. Bond Street or S. 11th Street were suggested as alternative routes.

Completion of phase II Indiana-Michigan River Valley Trail has been in the works since 2016 when the township was first recommended for state grant funding to help pay for the project.

In April, township trustees voted unanimously to award a bid for the trail to Anlaan Corporation for the cost of roughly $1.2 million.

Wednesday morning, trustee Herschel Hoese joined Jim Stover, the township supervisor, in commemorating the occasion. Both said they were happy to see the project move forward.

Hoese added to this.

“That about sums it up,” Hoese said. “I’m glad it’s come to fruition. It’s been a long time coming.”

DeLucia said project officials intend to host a ribbon cutting ceremony in October to celebrate when the trail is complete. Since phase one of the trail was created in 2014, DeLucia said she had seen it well utilized.

“We see people walking, rollerblading, skateboarding, as well as cycling,” DeLucia said. “It is a great asset to the community for sure. And to be completed like this and connecting the communities should open Niles up to people exploring from the south and east.”