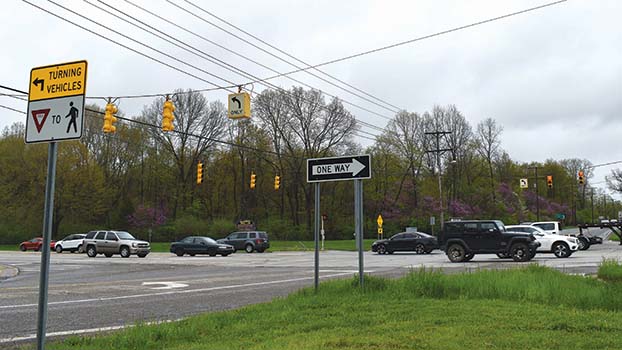 Below, traffic passes through the S. Third Street and U.S. 12 intersection Tuesday afternoon. Township officials are hoping a resolution will persuade MDOT officials to leave the intersection as is and not add indirect left turns. (Leader photo/KELSEY HAMMON)

NILES TOWNSHIP — With travelers’ safety in mind, Niles Township trustees are joining a county commissioner in the hopes of persuading MDOT officials to eliminate proposed indirect left turns at the S. Third and U.S. 12 intersection.

The revamp of the thoroughfare is among the changes expected as part of the overhaul of the M-51/U.S. 12 targeted for construction in 2023.

During a regularly scheduled meeting Monday night at the township hall, trustees unanimously supported a resolution proposing that this particular intersection be left as is and not incorporate indirect left turns, otherwise known as a Michigan left.

Trustees were joined in their support by Berrien County Commissioner Jim Curran, who helped to create the resolution.

The intersection at S. Third Street and U.S. 12 has been revamped twice by MDOT, once in 2006 and in 2013, according to Curran. Today, there are traffic lights and crosswalks in place and drivers can turn directly onto U.S. 12 when traveling east or west. Curran and trustees said they believe an indirect left turn would undo the work that improved the intersection’s safety features with the upgrades.

The resolution listed three reasons the indirect left could be problematic:

• Trustees believe leaving the intersection as is would be in the best interest of traffic flow. They said injuries and fatalities dramatically decreased when the intersection was upgraded to include direct left turn lanes.

• The intersection sees a high volume of tanker trucks and trustees believe that a Michigan left would create difficulty for the trucks traveling east and west along U.S. 12.

While the traffic light would remain in place, drivers would no longer be able to make direct left turns. Treasurer Jim Ringler said he feared the results could be dangerous.

“[The current intersection] has improved 100 percent,” Ringler said. “If they went back to the Michigan turn arounds, I’m afraid that the whole light system will not be coordinated. I’m telling you, this is a lifesaver right now.”

“You are increasing the number of cars that are actually going to cross the trail,” Cooper said. “I think that is a big issue.”

The overhaul of the M-51 and U.S. 12 interchange has been a discussion since last year when MDOT officials announced that they were considering alternatives to replace the aging bridge that spans S. 11th Street. After several public hearings, MDOT officials announced in March that they were leaning toward the option to replace the bridge with an at-grade signal and implementing indirect left turns on the east and west side of the intersection. The cost of this option is estimated to be about $8.7 million.

Curran attended the meeting Monday night and said MDOT would be spending approximately $2 million at the S. Third and U.S. 12 intersection.

“I just think there are better ways they could spend that,” Curran said.

Curran said he recalls one pedestrian accident since the intersection was upgraded.

“In other words, they (MDOT) fixed a problem,” Curran said. “I’m like for $2 million, no, don’t screw up the intersection because it works right now. Everybody is familiar with it.”

Curran added that while the state owns M-51 and U.S. 12, Third Street is a county road. Therefore, local officials should have some say, he said.

For their part, MDOT predicted in recent public hearing documents that the at-grade signal and indirect left turns would see the least number of traffic crashes, compared with the other options proposed, which included a diamond interchange and direct left turn options.

MDOT officials could not be reached for comment before press deadline.

Volunteer of the Week: Beverly Woodson, of Niles