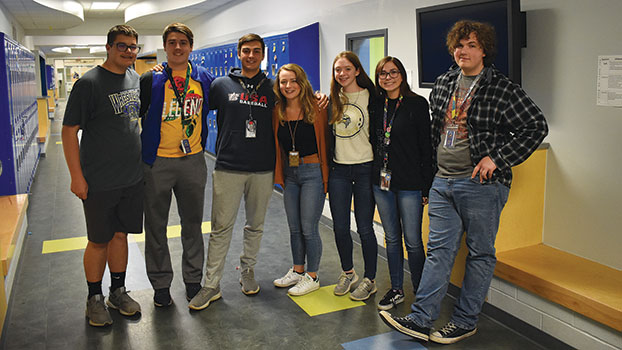 NILES — High school history classes have the potential to teach students far more than the dates and facts outlined in textbooks.

Niles New Tech students took this concept to heart through a collaborative project with Escape the Cell owner Andrew Irwin. Together they designed two escape rooms for their modern American studies class that they hope will excite their community about history and the lessons it can illustrate.

Niles New Tech teacher Nicholas Hawley said the idea was to get students to apply the knowledge they gained in the classroom to a community project. He said students have been learning about post World War II history leading up to the Cold War. They also recently read “The Crucible,” a dramatized play about the Salem witch trials written by Arthur Miller. The classroom lessons emphasized the parallels between the historical incidents, both grounded in widespread and frequently unfounded fear.

Students drew their inspiration for the escape rooms from their textbooks and life outside the classroom. Tenth-grader Devin Hover said video games like Resident Evil and Portal provided some ideas for various puzzles to incorporate into his team’s escape room.

Lilly Jackson said she enjoyed how the project allowed students to dive deeper into the history they covered in the classroom. Jackson helped the team that created the Salem witch-themed escape room.

“I really enjoyed being able to put together the entire escape room,” Jackson said. “We were making puzzles, and I got to learn everybody else’s puzzles, which was really fun and interesting.”

In Cold War Breakout, participants will be immersed into post World War II society, when tensions between the U.S. and Soviet Union were escalating to form the Cold War. To exonerate the innocent and hold the guilty accountable, players must infiltrate a Soviet Union bunker to find secret information.

In the Salem Witch Trials, players are taken to colonial life in 17th Century Massachusetts. It is here where participants have been convicted of being witches. To prove their innocence, participants must unravel clues to escape a perilous end.

Cade Vota said those with a knack for history would likely have an edge in the game. Many of the clues coincide with real historical events, he said. Vota added that he liked how the project encouraged students to utilize their critical thinking skills in a new way.

“You are kind of always taught how to do a puzzle, rather than create one,” Vota said. “So, it was really interesting to kind of think backward from the endpoint.”

In February, Niles New Tech teacher Kristin Adams-Bondy reached out to Irwin with the idea to help students design escape rooms as part of a class project for a modern American studies class.

Irwin described the project as a rewarding opportunity and said he enjoyed returning to Niles High School, where he was a student from 1989 to 1990.

“It was great working with the students,” Irwin said. “Some came up with unique puzzles that I would consider using in my own rooms. They were very inventive. I added some features to the room for this project to help make their vision come together.”

To help students understand the escape room concept, Southwest Vision Center in Buchanan sponsored a weekend for students to try an Escape the Cell room.

“This was very generous of them, and the kids who came had a great time although the results differed greatly,” Irwin said. “Some escaped, others not so much.”

With the escape rooms open to the public, students said they hope to teach some lessons and also stump a few players.

The cost of the escape rooms is $20 per person. Escape room slots can be booked by visiting escapethecell.com.