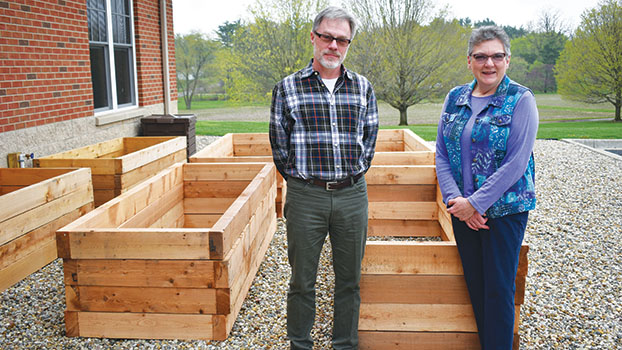 From left, Adam Burck, executive director of the Buchanan Senior Center, and Jan Ferris, program coordinator, stand next to garden beds outside of the senior center. Seniors will begin planting seeds for the garden in mid-May. (Leader photo/KELSEY HAMMON)

BUCHANAN — On the south side of the Buchanan Senior Center, a bed of rocks is about to be transformed into a garden that will provide seniors with fresh vegetables, herbs, and flowers.

Looking at the recently installed garden beds late last week, the vision is one Adam Burck, the facility’s executive director, and Jan Ferris, the program coordinator, can easily picture. It has taken more than two years of work and fundraising more than $8,200 to bring the garden to fruition.

Within the next two weeks, seniors will fill the eight raised garden beds with seeds and plant varieties. An arbor will be installed and shade part of the walkway leading to the garden with climbing vines.

A ribbon-cutting ceremony to commemorate the garden is being planned for the end of May.

With the beds in place, anticipation around the garden finally opening has been palpable.

“Everyone is really excited about it and can’t wait to start growing stuff,” Ferris said. “That’s what they are excited about is getting in and getting their hands dirty and working the garden.”

Both Ferris and Burck see the garden as an opportunity to provide social and emotional benefits while also filling an important nutritional need.

With the garden expected to produce fresh tomatoes, cucumbers, salad greens, and squash, to name but a few, those who work in the garden will be allowed to harvest what is produced. Any surplus produce will be used to stock commodity food baskets.

Burck added that they would be utilizing organic gardening practices.

“Getting organic produce at the farmer’s market is at a premium price,” he said. “This will allow seniors to do that without breaking the bank.”

The idea for the garden started about four years ago. Ferris brought the concept of a senior center garden to then executive director Monroe Lemay, who liked the idea. However, other priorities at the senior center kept the project from being worked on until about two years ago.

A committee was formed so that seniors could share their ideas for the garden and talk about what they want to see planted. When the garden begins to grow, volunteers will help to maintain the plants.

In addition to getting fresh fruits and vegetables, Ferris said she believes the garden will give a chance for some seniors to get back to their roots.

The senior center started soliciting donors for the project about two years ago and has since seen a lot of community support, Burck and Ferris said. They received a grant from the Berrien Community Foundation and donations from a variety of businesses across Niles and Buchanan. Funds raised helped to pay for garden beds, irrigation, the arbor and seeds. Vites Greenhouse has offered to donate a number of plants for the project.

Equipment still needs to be purchased, and the senior center is asking community members to donate unused gardening tools or make a donation.

Burck and Ferris said they see the garden having the potential to grow even larger. In the months to come, they said they will gauge interest to see if the garden can be expanded.

Until then, they said they look forward to seeing seniors get the chance to garden right at home in Buchanan.

“That’s what they are excited about is getting in and getting their hands dirty and working the garden,” Ferris said.