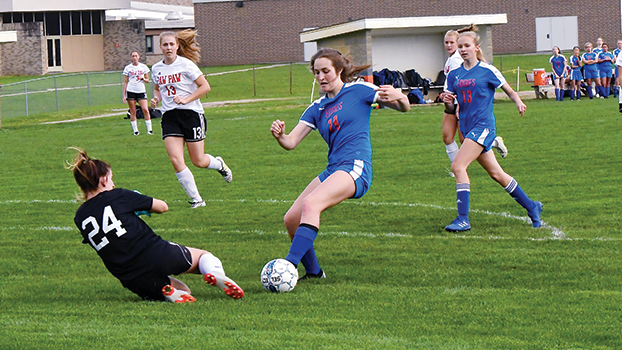 EDWARDSBURG — It has been a rough stretch for the Edwardsburg girls soccer team.

Losses to non-conference foes Lakeshore and St. Joe, as well as league losses to Allegan, Otsego and Vicksburg, had the Eddies looking to get back on the right track against another Wolverine Conference powerhouse Paw Paw on Wednesday afternoon.

Paw Paw extended the Eddies’ losing streak to six games with a 7-0 victory.

Edwardsburg’s Gracie Wilson had some good saves against the potent Paw Paw offense in the first 10 minutes of the match.

However, a goal by Katie Marger in the 12th minute, and follow-up goals by Claudia Muessig in the 16th and 20th minutes put Paw Paw (4-3, 2-2 Wolverine Conference) in the driver’s seat.

Wilson finished with 15 saves in the game.

Edwardsburg (2-6, 0-4 Wolverine) had a chance to get on the board in the 29th minute when Hannah Coles broke through the Paw Paw defense, but her shot went over the crossbar. It was just one of a handful of chances she had but could not find the back of the net.

With just seven goals so far and the season nearing the midway point, Edwardsburg coach Sean Jesse knows Coles has many more opportunities coming up.

“She has shown that she can score against some of the better teams in the area like Allegan and Lakeshore,” Jesse said. “She was frustrated tonight and you could tell, but she stayed level headed and calm most of the time.”

Baylee Smith scored in the 35th minute and Muessig completed her hat trick just before the halftime whistle blew, giving Paw Paw with a 5-0 lead.

Muessig didn’t stop her scoring in the second half, capping her night with goals in the 63rd and 67th minutes.

“We continue to be a work in progress,” Jesse commented. “We have played some very talented team as of late and sometimes it’s tough to see against those better teams. Sometimes our touch isn’t quite there to allow us to play possession soccer, but we are getting there and taking our lumps as we go.”

Jesse added that if his team could have capitalized on some early chances, the outcome could have been different.

“Give credit to Paw Paw, but I think if we would have put a couple of goals on the board at the beginning of the game it would be a little different,” he said.

The Eddies look to get back in the win column as they travel to Dowagiac for another Wolverine Conference match-up on Monday.

Chieftains blanked by No. 6 Allegan

DOWAGIAC — Visiting Dowagiac was no match for the No. 6-ranked Allegan Tigers in a Wolverine Conference match Wednesday night.... read more