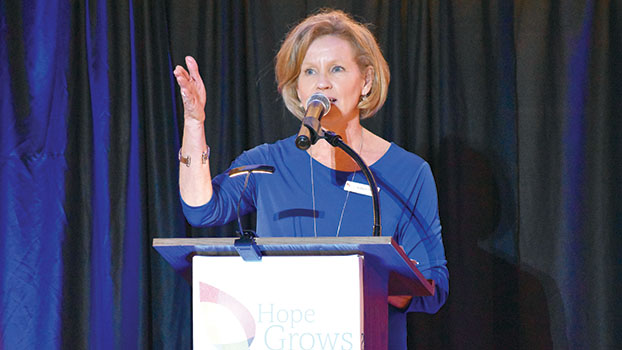 NILES — When Michael Schuhknecht’s wife, Jennifer was battling cancer, there were three things he said that kept them both strong: faith, hope, and love.

Schuhknecht shared his story as a keynote speaker during the sixth annual Hope Grows luncheon Thursday at the Niles-Buchanan YMCA. The luncheon was catered by Niles High School culinary students and saw a record attendance of 336 people.

Hope Grows is a partnership between Lakeland Health Foundations and the YMCA of Southwest Michigan. Proceeds from the event helped to support a variety of cancer-related treatments, expenses and preventative services.

Schuhknecht said he remembers clearly the first time he saw his wife, Jennifer. It was a hot July day in 1979, and they ran into each other on a beach in Michigan.

“When you find your true love, something happens,” Schuhknecht said. “You feel weird. Your heart pitter patters. Steam comes out of your ears.”

The pair began dating shortly after first meeting. Their relationship grew, and soon they welcomed their “first child,” a Dalmatian puppy, into their lives.

On June 2, 1992, they married. Two years later, Jennifer was diagnosed with melanoma. While the cancer was removed and she recovered, it would not be the family’s last battle with cancer.

As Schuhknecht remembers it, life went on. The couple welcomed their two daughters into the world and adopted a couple more dogs and horses.

In May 2013, Jennifer was diagnosed with breast cancer.

“And wow, how did this happen?” Schuhknecht recalled of his shock.

Jennifer went through surgery, radiation and chemotherapy. Reflecting on his experience, Schuhknecht said it was crucial that his family rally together to provide support for Jennifer.

“If you have hope, faith and love, they will build each other and yourself and the rest of your family and your community,” Schuhknecht said.

Today, Schuhknecht has 20 years of experience as a bariatric surgeon. Jennifer has been cancer free for five years. The couple is expecting their first grandchild in the next couple of months.

Schuhknecht used his story to talk about the importance of early cancer detection.

Jane Brandstatter, the chairperson of the Hope Grows committee, spoke Wednesday to encourage people to continue to support Hope Grows.

Not including proceeds from Wednesday’s lunch, she said the luncheon had raised more than $190,000 for the cause.

“Hope Grows is growing,” Brandstatter said. “It has happened because people have attended [this] event. They have walked away and thought about how they could give more.”

She said the luncheon had helped to spread the word about the organization, encouraging people to become members or to help throughout the year by donating funds.

Brandstatter encouraged the community to help Hope Grows have an even more significant impact. People interested can sign up for a membership or donate online.

She quoted Booker T. Washington who once said “those who are the happiest are those who give the most.” She added that she found research indicating that helping local causes is particularly beneficial.

To learn more about Hope Grows, people can visit lakelandhealth.org/lakeland-health-foundations/events/hope-grows.