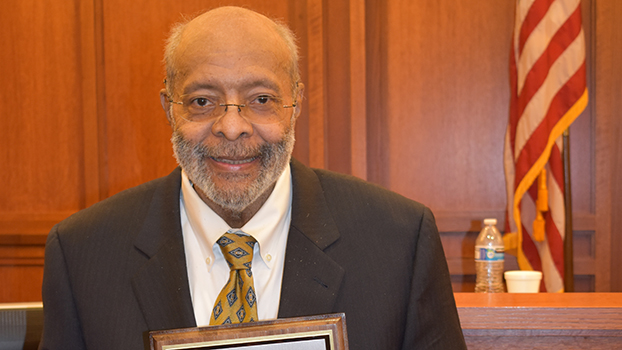 Roosevelt Thomas poses with his 2019 Hillman Award. The plaque reads, “In recognition of your contribution, dedication and commitment to developing trial layers through the Hillman Advocacy Program.” (Leader photo/ADAM DROSCHA)

CASSOPOLIS — A courtroom is a space Roosevelt Thomas and his colleagues know quite well. As a trial lawyer, he has seen courtrooms across the Midwest, but on Tuesday afternoon his presence in the courtroom was not to make a defense to a jury or to show off his legendary showmanship, but to celebrate his long contribution to his home community.

On Tuesday, Thomas, of Cassopolis, was surrounded by colleagues, family and friends to receive the 2019 Hillman Award, which recognizes the work of trial lawyers who train other upcoming trial lawyers in the Hillman Advocacy Program. The ceremony was hosted at the Cass County Law and Courts Building where several colleagues spoke to Thomas’ legacy.

“The thing about Roosevelt was he always had an open door,” said Cass County Circuit Judge Mark Herman. “He always had a smile and made time for people.”

An open door and good, welcoming attitude were the most surface level components of Thomas’ legacy. Herman spoke to Thomas’ education as a graduate of Cassopolis schools, and ultimately Notre Dame Law School, as well as Thomas’ outstanding record of volunteer work with the Hillman Advocacy Program.

“Roosevelt was involved in Hillman Advocacy for more than 20 years, was on the steering committee, and it was all done on a volunteer basis,” Herman said. “I don’t think anyone can doubt he’s one of the premier trial attorneys in west Michigan.”

Many of Herman’s sentiments were echoed by Chief U.S. District Judge Robert Jonker, who also spoke at Thomas’ ceremony.

“It’s an honor for all of us to have benefitted from all you’ve done for the program,” Jonker said.

Jonker spoke to the reputation of Thomas as an exceptional trial lawyer, one who held a specific presence in the courtroom and was an exemplary figure to young lawyers.

“I think Roosevelt was born to be a trial lawyer,” Jonker said. “He carried himself in the courtroom so people naturally looked at him. He had such a large presence in the courtroom.”

Jonker also spoke about how Thomas embodied the role of teacher, as opposed to just the role of a lawyer.

“It’s not enough to just be trial lawyer, but you can teach as well,” Jonker said. “You were more than a showman, you were a teacher. You had the ability to gently teach in a way that didn’t threaten and didn’t shut [students] down.”

Probate Court Judge Susan Dobrich organized the ceremony for Thomas and ensured he was given the recognition she felt he deserved. Having worked alongside Thomas for many years, she was impressed not only with Thomas’ years of advocacy training and notable courtroom showmanship, but also by the fact that he returned to Cass County to practice law.

“This is a community award from Cass County,” Dobrich said. “This is your home and we love you. When you came back from Illinois, it was a great joy to have a hometown kid come back. Clearly this award is well deserved.”

Dobrich reiterated her statement in private commentary and reflection on Thomas’ work and legacy.

“It’s important when people come back to community they were raised in,” she said. “He came and he gave back.”