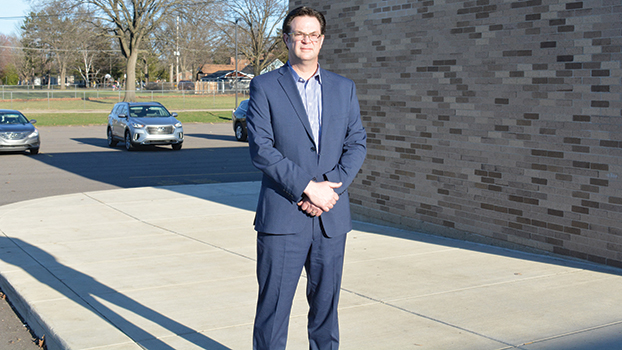 Dowagiac Union Schools Superintendent Paul Hartsig had his resignation approved by the board of education Monday. His resignation will be effective June 30. (Leader photos/SARAH CULTON)

Monday evening, during a special meeting of the Dowagiac Board of Education, the board approved the resignation of Superintendent Paul Hartsig, following a more than 20-year career with Dowagiac Union Schools. Hartsig’s resignation will be effective June 30.

“I cannot express how grateful I am to have had the opportunity to lead Dowagiac Union Schools for the last five years,” Hartsig said. “My family and I will always be grateful for the opportunities that have been afforded to us here.”

Hartsig began his career at Dowagiac Union Schools in 1995, teaching math and science at Dowagiac Union High School. He became principal of the high school in 2004. In 2012, Hartsig left the district to work as the principal at Bridgman High School, though he returned to Dowagiac in 2014 as superintendent. At the time, he said that he appreciated the opportunity to serve the community in which he lived.

Throughout his time as superintendent, Hartsig said he was most proud of the Early College Program, which allowed students to dual enroll in community college to graduate with an associate’s degree out of high school, and the work to the schools through the bond that passed in 2015.

“I’m proud to have worked with a great group of people in all positions,” Hartsig said. “Twenty-two years here. I’m so grateful for everything.”

Hartsig is leaving his position at Dowagiac Union Schools to become the superintendent of Bath Community Schools, located near Lansing, Michigan. Hartsig said the decision to move was not an easy one, but one that would bring him and his wife closer to family, adding that now was the right time to make a move as his daughter is young and has not yet entered high school.

During Monday’s meeting, board members said they accepted Hartsig’s resignation “with regret” and thanked him for his service to the district over the years.

Board Trustee Terry Groth, who had Hartsig as a teacher in high school, said he has enjoyed seeing the things Hartsig has done in the district as he thanked him.

“I really appreciate everything you have done for the schools,” Groth said.

Now, the board of education is facing the task of finding a new superintendent.

During Monday’s meeting, the board heard a presentation from Charles Dumas, a consultant with the Michigan Association of School Boards. He advised the board that a search for an external candidate could take up to 13 weeks. He also recommended that if the board has any strong candidates in mind from within the school district that a formal superintendent search through a consulting firm like his own may be a waste of time and money.

Board President Larry Schmidt suggested that he would be interested in interviewing internal candidates first, as the school district is still undergoing improvements under the bond proposal that he believes that someone already with the district may be better equipped to handle.

However, other board members, like Ron Jones, said they would be interested in further exploring the idea of an external candidate search.

“I think we really need to look outside the district this time without telling internal candidates that they need not apply,” Jones said.

No formal action or vote was taken on the matter Monday.

No matter what direction the board decides to move in, Dumas advised members that they needed to move quickly.

“Time is of the essence,” he said.

As the school district moves forward with the search for a new superintendent, Hartsig said he hopes that whoever the next superintendent may be will be someone who will uphold the values of the Dowagiac School District and will continue to move the district in a positive direction.

“I just hope we can continue doing the things we started doing,” he said. “I hope we continue on with curriculum programs. I hope someone comes in that is appreciative of the great staff we have and the great work they do and that they continue to do those things.”

The board will next meet at 7 p.m. April 15 for its regularly scheduled meeting.