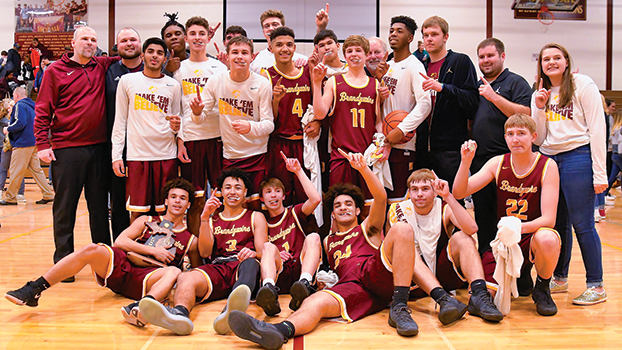 NILES — For the first time this season, Brandywine senior Center Jaden Croom shined ahead of everyone else on the court.

Showing his shooting range inside and outside, as well as using his 6-foot-5 presence to dominate the boards, Croom led the Bobcats to a 73-45 victory over the Hartford Indians in the Division 3 district championship game hosted by Brandywine Friday night.

Both teams traded the lead throughout the first quarter, with Brandywine taking a 14-13 advantage into the second quarter.

That lead ballooned to 20-13 quickly as Croom and Jordan Abrams put on a shooting clinic in the second quarter.

Abrams drained a 3-pointer from half court at the halftime buzzer and the Bobcats led 36-23.  Abrams had 20 points on the night and tallied six rebounds, two assists, and a block.

Hartford made some halftime adjustments and cut Brandywine’s lead to 38-32 just two minutes into the third quarter.

But an 8-0 run by the Bobcats thwarted any attempt at an Indians comeback, and Brandywine led 53-38 heading into the final frame.

Clamping down on the defense, Brandywine outscored Hartford 20-7 in the fourth quarter and were able to play the entire bench to help solidify victory.

“That’s the Croom we have been missing,” Knapp said. “He picked a great game to come out. He didn’t force it and let the game come to him.”

So, we told him we were going to ride him all game.”

Jaelen Briggs and Caleb Byrd each had nine points for the Bobcats, Shane Brown chipped in five points.

The Bobcats (20-2) now have a date in the regional semifinal with the Schoolcraft Eagles (19-4) on Tuesday night hosted by Watervliet High School. Tipff is set for 6 p.m.

Cassopolis and Union City will play in the other semifinal at approximately 7:45 p.m.