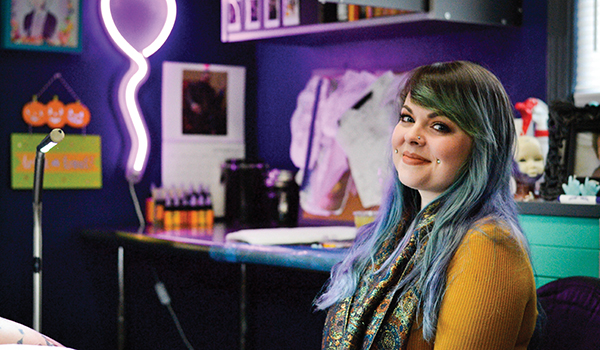 Amber Olsen was a student at Brandywine High School when sometimes it seemed the stress of everyday life was suffocating. It was in these moments when she would pull out her sketch pad and skip class to take refuge in the art room. As she drew, these stresses evaporated for the moment.

Today as a tattoo artist for South Bend’s Stillhouse Tattoo & Piercing, Olsen faces a whole new set of pressures: creating a permanent work of art that her clients can wear with pride. The job calls for late night hours spent sketching, erasing and creating. Still, when she holds the pencil or tattoo gun in her hand, the rhythm of creating art still has the power to make everything else melt away.

“Art has probably been the only consistent thing in my life forever,” Olsen said. “I think I suffered really badly from anxiety and depression as a teenager and art — when I was into it, nothing else mattered. It sounds cliché, but it really was like an escape for me.”

Olsen has served as a Michiana tattoo artist for a number of years, channeling her passion for creating iconic tattoos. She has developed a reputation for making tattoos that pop. While a glance through her sketchbook shows that no two artistic styles appear the same, the artist is well known for her use of bright colors, creativity, watercolor style and knack for being able to conjure up a reaction from the tattoos she creates.

“Some people are like, ‘I can always tell when it is your tattoo,’ and that kind of blows my mind,” Olsen said.

Olsen believes her color pallet is part of what gives her style a signature look.

However, Olsen said she never saw herself growing up to become a tattoo artist. It was an ex-boyfriend with a penchant for homemade and poorly executed tattoos that first connected her with the craft.

“I remember thinking, ‘I could do better drawings than that and I could make money at it,’” she said.

He was her first subject and she tattooed a peace sign with a Godsmack sun around it when she was 17 years old. Fortunately for her, Olsen said she made it out of the relationship without a lousy tattoo to show for it.

While studying art at Southwestern Michigan College, Olsen decided to take on an apprenticeship in a tattoo shop.

“I just kind of stuck with it,” Olsen said.

Olsen persisted, starting with an apprenticeship at Body Art Gallery in Mishawaka and then on to Paparazzi Tattoos. Olsen asked Stillhouse for a job, but at the time they turned her down. When Stillhouse did offer her a job when she asked again, Olsen felt it was a turning point in her career. It was at Stillhouse where Olsen said she got the opportunity to work with longtime tattoo artists who could give her pointers for improvement.

“I owe pretty much everything I have to this shop,” Olsen said.

Since the early days of her career, Olsen has developed a knack for crafting tattoos that can capture a moment or conjure a deep emotion.

Take for example a client who was on a mission to not eat meat. The woman approached Olsen with a unique request: create a tattoo that would make her feel too guilty to be tantalized by bacon and barbecue.

Determined to help her stick to her conviction, Olsen crafted a brown-eyed baby calf wearing a crown of colorful flowers. The tattoo did the trick. Looking at a rendering of the tattoo, it is hard not to feel a pang of guilt for ever eating a cheeseburger. This reaction is part of what Olsen believes turns a tattoo into a pure form of art.

“When a client comes to you with their vision, I think what a tattoo adds to that vision, that’s art,” Olsen said. “That’s why people come to me. People like my artwork and they want me to do my thing with it.”

Olsen has gone on to make a mark on many Michiana icons, including WWE legend Dori Prange, otherwise known as Ruby Riott. Prange got a dove tattoo from Olsen when Olsen was just a teen. Olsen confesses that Prange said she eventually got the homemade tattoo covered up, but she returned to Olsen to get another tattoo inspired by a Less Than Jake album cover.

Olsen said her job provides her freedom to not only use her art but also to be with her children, Vegas, 10, and Revy, 2.

“I can build my own schedule, so I don’t work past 2:30 p.m. I can go pick my kids up from school and have the afternoon with my kids,” Olsen said.

Until then, Olsen believes the job offers her freedom that her love of art often has.

“I feel like I don’t have to compromise who I am as a person to please a corporate setting. That was really important to me,” Olsen said. “I want to be who I want to be.”

To check out Olsen’s art work, visit her Instagram page at @artbyamberolsen.

Under a spray of white-hot sparks, leaping and bounding within inches of their protective helmets, Baylee Davis, 12, and Trinity... read more