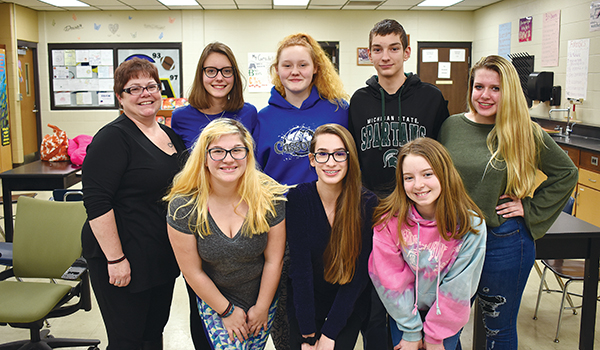 CASSOPOLIS — One of Cassopolis’ most fabled student organizations recently finished penning another successful chapter in its history — and its members are poised for a big follow up.

The Cassopolis FFA chapter enjoyed back-to-back triumphs at district and regional competitions this month, with 27 students qualifying to compete at the 91st Michigan FFA State Convention, which will take place March 6-8 at Michigan State University in East Lansing. The group of students moving onto state is the largest since FFA Advisor Abby Asmus began teaching at Ross Beatty, she said.

Among those heading to MSU next week is seventh-grade student Mason Smego, who is serving his first year with the youth agriculture science and leadership organization. Smego took second place in the Creed Speaking competition at regionals on Feb. 14, after taking first at districts on Feb. 5.

As Smego describes it, Creed Speaking requires competitors — who are in the seventh through ninth grade — to memorize and recite the organization’s five-paragraph long creed, as well as answer questions on its contents and FFA history from a panel of judges. The students are evaluated on how accurate their recitation was, how well they presented the speech and how they answer the judge’s questions, Smego said.

For the seventh-grader — who joined the chapter in September, following in the footsteps of his father, Marty, and older brother, Austin — doing so well his rookie year was a pleasant surprise and a great payoff for the over two hours of daily practice he was putting in to prepare for the district and regional competition over the past two months, Smego said.

“It’s been awesome to get a chance to compete,” he said. “I’ve gotten to meet a lot of new people while waiting with them in the holding room.”

For one of Smego’s FFA compatriots joining him at state, success has become a familiar feeling.

Senior Madison Suseland, who has been involved with FFA since seventh grade, recently received the top honors in both the district and regional Prepared Public Speaking competitions. Suseland wrote and delivered a speech on lab-grown meat, a subject she chose while doing research for another possible topic for her presentation, she said.

Like with Creed Speaking, competitors in the public speaking arena must deliver their talk in front an audience of parents and fellow FFA members, and field questions from judges pertaining to the subject of their speech, Suseland said.

Next week will mark the senior’s second trip to state for public speaking. Last year, she ended up ranking sixth in Michigan and is aiming for first and a bid to the national competition this go around, she said.

“I’m going to do my best,” Suseland said. “I would love to advance to nationals, but I know the quality of my fellow speakers is going to be very high. I’m excited to hear them as well as to compete myself.”

Both Suseland and Smego are hard at work preparing for East Lansing. The two, along with Smego’s brother, practice together quite frequently along with Suseland’s mother, Sharon, they said.

No matter what happens next week, though, the two said competing in FFA offers them far more than just a chance for glory and recognition.

For Smego, next week’s event will give him yet another chance to discover the thrills he had only witnessed when he was just an audience member watching his brother compete.

“My favorite part [of FFA] is meeting new people, having fun, hanging out with my fellow FFA members in the chapter and competing,” he said.

For Suseland, the organization has allowed her to gain valuable skills and experiences she will continue to benefit from long after her days in FFA end, she said. The senior plans to keep her passion for ag alive after graduating this spring, as she plans to study English in college in hopes of landing a job in the book publishing industry, where she would like to work on books that promote farming and agriculture to the general public.

“You don’t have come from a farm or farming background. It’s not just about ag,” Suseland said about FFA. “It’s about building your leadership and speaking skills, meeting new people, building confidence. [FFA] gives you so many opportunities. It’s one of the best experiences of my life.”

In addition to Suseland and Smego, the Junior High Conduct of Meetings, the Parli Pro and Greenhand Conduct of Meetings will compete at the state convention. Also, Nicholas Prestly is running for a state office position with the organization, while six members will also receive FFA Degree awards at the event.

“I’m really proud of the things these kids have accomplished,” Asmus said. “The Cass chapter is heading in a great direction. I wish them the best of luck at the state convention.”