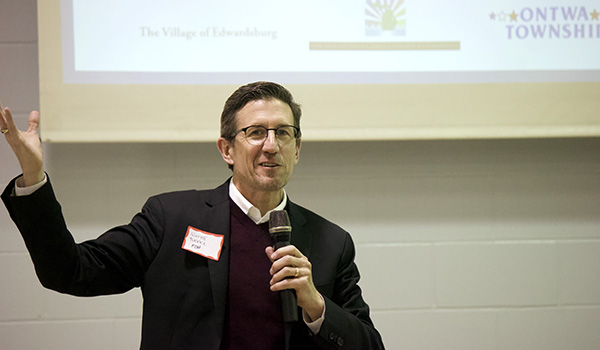 EDWARDSBURG — Located just a few feet away from each other on a teal brick wall were two stacks of yellow Post-it notes, each one containing a series of words that painted a picture of two communities that stood in dark contrast to one another.

On side of the wall, words such as “run down,” “depressed” and “ghost town” were sprawled across the small pieces of paper. On the other, people had written down phrases like “welcoming,” “inspiring” and “charming.”

A group of Edwardsburg leaders, business owners and residents packed the inside of Our Lady of the Lake church Monday to begin the first step toward moving past that first vision of their beloved hometown in order to reach the brighter, more hopeful one described in the second.

More than 100 attended the first session of the Edwardsburg Vision Project that evening. Michigan State University’s Sustainable Built Environment Initiative team led the discussion that evening, meant to encourage discussion on Edwardsburg’s and Ontwa Township’s current strengths and weaknesses and what things residents would like to see in their hometown 15 years down the road.

In addition to asking attendees to fill out the aforementioned sticky notes — writing one word or phrase to describe how they currently feel about Edwardsburg and another they would like would like to see the village become — the MSU officials collected answers on a series of questions from each table. Officials will use the data to determine what are the key priorities the community has for Edwardsburg, in an effort to help local leaders improve the village.

“We want to help create that shared vision for going forward, and use both images to help describe that and come up with some policies and recommendations to help move projects forward,” said Wayne Beyea, a senior specialist with MSU’s who led Monday’s visioning session.

MSU’s SBEI team has worked with more than 100 Michigan municipalities to come up with similar visioning projects. Last year, the university worked with the village of Cassopolis for “Imagine Cass” project, which drew around 200 people to its series of public meetings, Beyea said.

Robert LaBre, an attorney in the village, was one of many who spoke during the Edwardsburg session Monday evening. LaBre said he and others at his table agreed that one of the community’s best assets is its award-winning school system, as well as the fact the village still has a small-town feel.

“We’re near the bigger cities, but it’s still a small community where there’s a lot of support,” LaBre said.

Edwardsburg resident Rudy Gourdine praised the local library, saying it was centrally located, was staffed with friendly employees and had a lot of activities for kids. He also likes that there are many churches in the area, saying they “bring a sense of community.”

Others in the audience appreciated that Edwardsburg had its own police and ambulance service as well as a sports complex, while others appreciated the fact the village’s streets were well lit.

Despite singing the praises of the village’s numerous positive aspects, many in the crowd also found plenty to criticize.

Robert Parrish, a 36-year resident of Edwardsburg, said he and others at his table felt like the village was fragmented, with seemingly no plan to determine where businesses should be located, as some are on one side of the railroad tracks and others on the opposite end. Speaking of the tracks, Parrish said he was not a fan of the noise generated by the vehicles that use them.

“I live on Hamilton [Street], about two blocks away from the train,” he said. “It’s just so lovely, in the summertime, when you have your windows open and you get to right to the climax of the TV show you’re watching and the trains go by. It completely befuddles me how trains can be silenced in Indiana but not here in Edwardsburg.”

Other complaints the audience shared was with the lack of progress on the Lunker’s property, which has sat dormant since the shop closed in 2015. Many others said the community lacked a proper grocery store as well.

Finally, the coordinators asked participants what they would like to see in the community if they flew in a hot air balloon over the village 15 years from now. Attendees offered a litany of responses to this question, including a modern, innovative downtown; improved park facilities, with walking trails and bridges; and additional housing developments.

Tony Catanzarite, another Edwardsburg resident, would like the village’s leadership to create living spaces downtown though small, high-rise structures with mixed commercial and residential spaces, he said. He also wants to see Edwardsburg become more pedestrian and cyclist friendly.