Dowagiac’s Police Officer of the Year focused on serving people 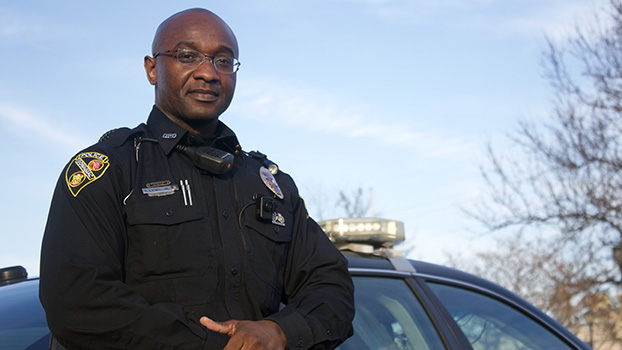 February is Black History Month, and to celebrate, Leader Publications will be recognizing African American individuals who are making an impact in the communities of Cassopolis, Buchanan, Dowagiac, Edwardsburg and Niles. Next up is Dowagiac Police Officer Thorn Lewis.

DOWAGIAC — Whether he is cruising down the road in his black and orange squad car while covering his usual beat through town or suiting up in a heavy Kevlar vest before responding to a dangerous warrant arrest, Dowagiac Police Officer Thorn Lewis’ attitude always remains the same: always be at his best, in order to help people who are at their worst.

Perhaps it was this attribute that most impressed the rest of Dowagiac’s finest, who last year named Lewis as the department’s Officer of the Year.

For the mild-mannered patrol officer, the distinction is quite the honor — but accolades and awards have never been his motivation for serving the community.

Instead, Lewis draws inspiration from a message that an old boss, former Cassopolis Police Chief Frank Williams, shared with him more than a decade ago.

“Chief Williams taught me that this job is all about how you treat people,” Lewis said. “It’s a lesson I still carry on today.”

While he has become a well-respected figure in the local law enforcement community, the 44-year-old’s path toward earning his badge was something he “fell into,” he said.

Growing up in a poor community in South Bend, Lewis graduated from La Salle High School in 1993. While working for a private security firm, he began studying for a paralegal degree, which he earned in 2003.

A year later, though, Lewis decided to pursue a career on the other side of the law and order coin, enrolling in the police academy at Kellogg Community College in Battle Creek.

“I knew I didn’t want to be behind the scenes,” Lewis said. “I wanted to be making a difference on the streets.”

While in the academy, Lewis began working as a corrections officer at the Cass County Sheriff’s Office. After completing his training, he would continue to earn a living in Cassopolis, joining the ranks of the village police department in 2005.

Mainly working traffic, Lewis’ job gave him the chance to provide support and a sympathetic ear to many people in difficult situations, such as women fleeing from a domestic violence situation. Growing in poverty allowed him to relate to many of the people he encountered on duty — some of the people he apprehended even thanked Lewis after their release from jail, apologizing for their behavior and thanking the officer for his understanding, he said.

In 2014, Lewis joined the ranks of the Dowagiac police department. In addition to serving as a patrol officer, around a year ago, the officer became a member of the warrant service team, which handles potentially dangerous operations such as the standoff that occurred Sunday in Edwardsburg, when  suspects barricaded themselves inside a home near Juno Lake while fleeing from police in Elkhart County.

“We give the victims a voice,” Lewis said when asked what motivates him to put in himself harm’s way. “It shows that they are not alone.”

What Lewis — who currently resides in Niles along with his wife, Melissa, and their combined household of nine children — particularly enjoys about his job is knowing that he and his fellow officers are supported by many in the community — something that not every police department across the U.S. enjoys, the officer said.

Lewis recalled a particularly special moment he experienced just earlier in the week. While doing a round through Borgess-Lee Memorial Hospital, a patient called the officer into his room and thanked him for serving the community, adding that he was a positive role model for young local African-Americans.

“He told me I was a beacon,” Lewis said. “I was really humbled by that.”