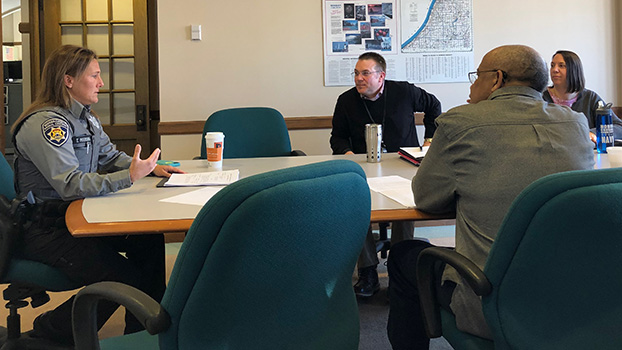 Berrien County Animal Control Director Tiffany Peterson speaks to the Berrien County Board of Commissioners Administration Committee Thursday morning in St. Joseph. The director asked the commissioners to consider increasing the adoption fees at the shelter, to help offset the costs of spaying/neutering dogs and cats before the department puts them up for adoption. (Leader photo/TED YOAKUM)

ST. JOSEPH — With Berrien County Animal Control officers providing more care than ever to providing the dogs, cats and other animals that enter their custody, the department’s director is looking to work with other county leaders to make these services more financially feasible.

Berrien County Animal Control Director Tiffany Peterson provided an update on the current operation of the department during the meeting of Berrien County Board of Commissioners Administration Committee Thursday morning in St. Joseph. During her presentation, Peterson asked the commissioners to consider a proposed increase in dog and cat adoption fees at the shelter, bumping the costs up to $75 for neutered/spayed (altered) canines and $20 for altered felines.

The proposed fee hikes would offset a portion of the costs that animal control incurs to properly prepare dogs and cats for adoption, said Peterson, who has worked for Berrien County Animal Control since 2017.

Among the operations the shelter pays for are tests for parasites like heartworm or illnesses like parvo; flea prevention; and rabies shots and other vaccinations. Animal control spends around $137 to prepare a dog for adoption and $103 for a cat, with most of the costs going toward having the pets spayed or neutered. While the county is able to get competitive rates for the surgery from clinics outside the local area, Peterson’s officers are required to transport animals up to an hour away for treatment.

“The resources in Berrien County are not here,” Peterson said. “If somebody would open a low-cost spay/neuter clinic here, with like two vets running it, they would be slammed.”

Peterson’s proposal would also allow the department to offer slightly smaller refunds to residents who agree to adopt unaltered animals and pay to have them fixed after taking them in. The shelter currently charges residents a refundable $50 fee for unaltered dogs, which would be increased to a $75 charge that residents can receive a $50 refund on per the proposal. The plan would still allow residents to take home unaltered cats for $30, but they would receive a $20 refund after having the feline neutered/spayed instead the $25 they currently receive.

Although no statute requires the department to provide adoption preparation services to the dogs and cats the shelter takes in, Peterson believes they are in the best interest of the animal and taxpayers — though, without additional funding or revenue, the effort to provide is unstainable based on donations to the shelter alone, she said.

Berrien County Board of Commissioners Chairman Mac Elliott, who sat in on the administration committee meeting Thursday, expressed concern with possibly increasing the shelter’s adoption fees, instead suggesting that the board perhaps review the amount animal control is receiving for medical services.

“My guess is what you generate with incremental increases in fee may be more than offset by the loss — particularly of cats – of the customer base,” Elliott said. “They [residents] aren’t going to pay a whole lot of money for a cat.”

County Administrator Bill Wolf mentioned the department could bring in additional revenue by increasing the licensing fees residents are required to pay for canines, though that would likely cause a number of dog owners to simply stop renewing their pet’s paperwork, he said.

Despite her financial concerns, Peterson is quite optimistic about how things are going at the shelter, she said. Last October was a “phenomenal” month in particular, with more than 80 dogs leaving the shelter, due to residents adopting them or another humane agency taking them in.