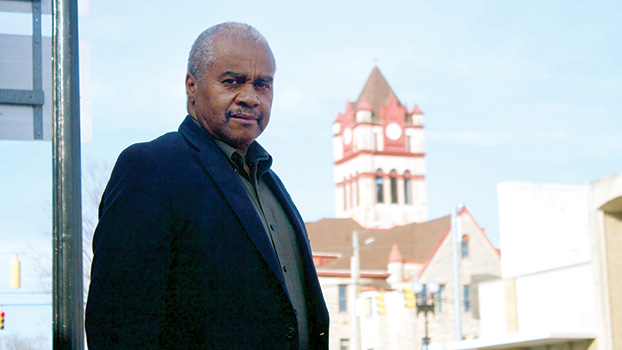 February is Black History Month, and to celebrate, Leader Publications will be recognizing African American individuals who are making an impact in the communities of Cassopolis, Buchanan, Dowagiac, Edwardsburg and Niles. Next up is Cass County Commissioner Skip Dyes.

CASSOPOLIS — Growing up in rural Cassopolis, Skip Dyes was not born into riches.

His grandfather, Larkin Vorters, purchased a farm in Cass County in 1939. Vorters had already relocated to Chicago from South Carolina as one of the 6 million African-Americans who left the Jim Crow South to find a better life up North.

After the end of World War II, Vorters’ son, Boston Dyes, joined his father in Cassopolis with his wife, Nancy. Boston would go on to become a minister at Chain Lake Missionary Baptist Church, while Nancy earned a living by cleaning homes.

While he may have been born into a working-class family, young Skip had something his grandfather and parents did not have while growing up in the deeply segregated South — opportunity.

While his father spent his youth living in Clarke County, Mississippi — home of the infamous “Hanging Bridge,” said to have been used to lynch at least six African-Americans — Skip grew up heeding the advice from his family and other black business owners in the community. While his mom was pulled out of elementary school — as the plantation where her family was working did not see a need for its black farmhands to receive a formal education — Skip was deeply dedicated to his studies and developed a strong passion for agriculture, both of which led him to become the first member of his family to attend college.

Dyes has taken advantage of the opportunities he was giving, becoming of one of Cass County’s most accomplished public servants. He currently serves as the District 3 representative on the county board of commissioners, a seat he has held since 2010 after serving as the supervisor of Calvin Township for 16 years.

Relaxing at a table inside a small, cozy library of his wife’s law office — located inside a former drug store in downtown Cassopolis that Dyes remembers frequenting as a child — Tuesday afternoon, the local leader reflected on his life and career in Cass County.

Except for his years studying agriculture finance at Michigan State University, Dyes has called Cass County his home for his entire life — in fact, he is the only one of his six siblings who still lives in the southwestern Michigan community, he said. He attended school in Vandalia until the district was integrated into the Cassopolis system in the early 1960s, graduating from high school in 1971.

Since he was a child, Dyes has followed a key piece of advice his grandfather shared with him — get to know as many people, from as many different walks of life, as possible.

Dyes became acquainted with several local businessmen — including Dowagiac’s James Crawley, the African-American owner of Solid Waste Disposal — who Dyes learned a lot from, he said. The young Cassopolis man also came to know practically every farmer in the region through his high school job working at a local John Deere dealership, he said.

“I tell people, if you own a John Deere tractor, I probably know you,” Dyes joked.

Spending much of his teenage years helping out his grandfather at the farm, Dyes grew to love agriculture, prompting him to pursue the field when he decided to go college.

Even as a young adult, Dyes said he could feel a sense of responsibility and obligation on his shoulders as one of the first African-Americans in his community to seek higher education.

“Right before I went away to college, a group of people at my church pulled me aside and told me, ‘You’re going to school for us, too. Don’t mess our names up!’” Dyes recalled.

After graduating from MSU in 1979, Dyes moved back to Cassopolis, briefly returning to his old job at the John Deere dealership before taking a job in Elkhart for several years, he said.

In 1984, at the suggestion of his sister, who was then serving as the Cassopolis High School principal, Dyes began working with the vocational services program at Lewis Cass ISD. For years, Dyes got to know many students through the ISD’s agriculture program before his retirement in 2014.

In 1992, after one of his friends suggested he run for office, Dyes was elected as Calvin Township supervisor, an office he held for the next 16 years. During his tenure as supervisor, Dyes oversaw the introduction of zoning laws to the township, as well as the creation of blight ordinances, which led to the demolition of more than a dozen abandoned buildings, he said.

In 2010 — again at the prompting of a friend — Dyes successfully ran for Cass County District 3 commissioner, a seat he has retained ever since.

Representing a district of around 7,000 residents, Dyes has helped lead the charge to modernize the county’s records, which has included the implementation of a digital document imaging system at the Cass County Courthouse.

Despite several looming issues — including what to do with the county’s vintage courthouse, a topic Dyes and other commissioners expect to address later this year, he said — the commissioner is optimistic about the county’s future. Dyes wants to make the county an even more appealing place — especially for natives such as himself — to make a living and raise a family.

Although the nation has come a long way from the days of hangings and cross burnings that his forefathers were forced to live through, Dyes recognizes that even in Cass County, which does not bear the same amount of racial scars as Dixieland, more can be done to foster an environment of inclusion in the local area, not just between different races but also different socio-economic classes. The county commissioner said he would love the opportunity to help foster these types of hard conversations, which will only make his beloved home that much stronger, he said.

“It would make the county a different place if we knock down these walls that aren’t really there,” he said.