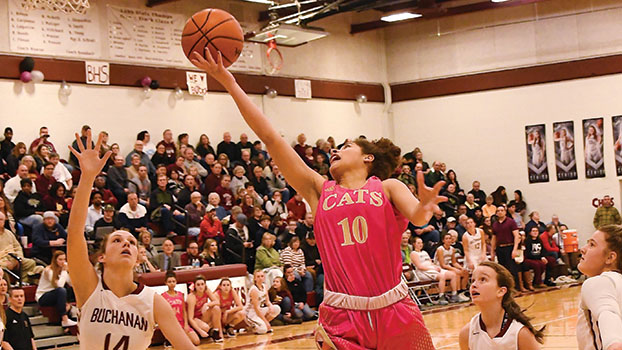 Brandywine’s Zakiyyah goes in for two of her 17 points against Buchanan Friday night. (Leader photo/KELLY SWEENEY)

BUCHANAN — Looking to bounce back from a close loss to Comstock, the Brandywine Bobcats made the short trip to Buchanan High School for a BCS Red Division contest Friday night.

And much like the score from the earlier meeting between the two teams, Brandywine used its suffocating defense and won 63-25 to improve 12-3 with two weeks left in the regular season.

With the game deadlocked at 4-4 on free throws through the midway point of the opening quarter, in the blink of an eye, the Bobcats went on an 18-0 run to blow the game wide open.

The Bucks showed signs of life when Emma Lozmack went on an 8-0 run of her own to end the first half and cut the Brandywine lead to 29-8. Lozmack finished with a team-high 14 points and added four rebounds.

“We want Emma to shoot the ball when she has open looks,” said Buchanan coach Gabe Miller.  “It will continue to increase her confidence going forward.”

“Buchanan was inspired and they hit some huge shots,” said Brandywine Coach Josh Hood.  “You have to give credit to Gabe (Miller). He had his kids ready.”

Brandywine came alive in the third quarter on both ends of the court.

Behind 13 second-half points from junior all-state point guard Zakiyyah Abdullah, the Bobcats outscored the Bucks 20-2 in third and 14-5 in the final quarter, to earn their 13th win of the season. Abdullah would finish with a game-high 17 points to go along with five rebounds and two steals.

“We have really struggled to play a good first half in a long time,” Hood said. “I challenged the girls today to do that. We have to come out better and play inspired. We have girls that are offensive minded and defensive minded. And this program is built on defense.”

Because of the recent weather, Brandywine started a stretch of five games in eight days including games on Saturday, Monday, Wednesday and Friday.

Buchanan has also had its problems with the weather.

“We have missed nine or 10 practices because of the weather,” Hood said. “So, we got a little tired at the end there. We are definitely looking forward to some spring weather here coming up and see what happens come district time.”

Megan Adkerson led the Bucks with five points. No other Buchanan player had more than two.

It didn’t take long for the emotions to show in the latest installment of the Brandywine-Buchanan rivalry, which ended with a 59-46 BCS Red Division victory for the Bobcats Friday night.

Just a few minutes into the game, the Bobcats’ Shane Brown and Bucks’ Chris Young each received technical fouls after an altercation on the floor.

Once cooler heads prevailed, Jordan Abrams, the Bobcats’ hot hand at the moment, started the scoring off with a 3-point basket to silence the crowd on homecoming night.

But the Bucks’ Isaiah Rimpson answered right back with his own triple. Abrams and Rimpson put on quite the first-quarter show, which ended up with Brandywine leading 11-10. Abrams finished nine points and Rimpson with six points.

The Bucks had an outstanding second quarter on the defensive side of the ball, limiting the Bobcats to eight points and taking the lead 22-19 at halftime.

Buchanan’s Brad VanOverberghe had five rebounds in the frame and finished with nine on the night.

“Defensively I thought we played well in the first half,” said Buchanan Coach Reid McBeth.  “The atmosphere was electric tonight. I was proud of the effort our kids put in.”

“Buchanan did very well defensively against us in the first half,” said Brandywine coach Nathan Knapp said. “We tried to do too much of our own instead of looking to the high post. It was good for our kids to see that. We need tough games like this going into the state tournament.”

Buchanan started the fourth quarter on an 8-2 run to cut the lead to three, but the Bobcats grew the lead back to 10 on a 7-0 run of their own.

Brandywine was big on the offensive glass as Caleb Byrd and Jaden Croom combined for seven offensive rebounds. The pair ignited the spark that the Bobcats needed to get their 15th win on the season.

“All in all, it was a great team effort,” Knapp said. “I’m happy with the game today.”

Young finished with 10 points for the Bucks.