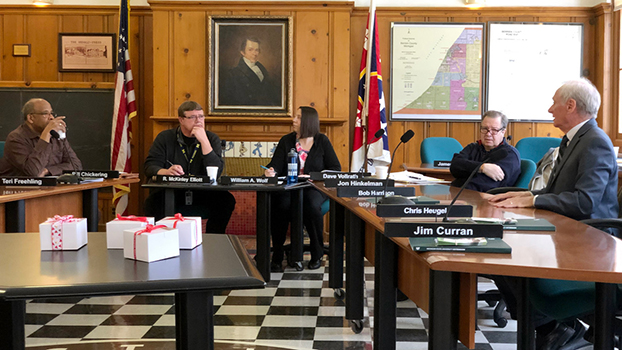 Prosecutor Michael Sepic talked about his recent participation in an area panel on marijuana during his presentation to the committee that morning. (Leader photo/TED YOAKUM)

ST. JOSEPH — As Berrien County and Michigan as a whole continue to venture through uncharted territory following state voter’s decision to legalize recreational marijuana in November, one county official intends to do his part to make sure the public does not get swept away in any murky waters along the way.

Berrien County Prosecutor Michael Sepic recapped his recent participation in an area marijuana forum during the meeting of the Berrien County Board of Commissioners Administration Committee Thursday in St. Joseph. Sepic shared concerns about the new “wild west” surrounding the recently enacted legalization law and told the committee that law enforcement agencies should push courts to set clear guidelines on some greyer aspects of the statute.

The prosecutor was one of several Berrien County officials — including Sheriff Paul Bailey, Chief Public Defender Christopher Renna and 3rd District Commissioner Don Meeks — to speak at a panel discussion on the topic that took place last week in Benton Harbor. Much of the discussion at the panel focused on what is and is not permitted by the new law, which limits the sale of marijuana to businesses specially licensed by the Michigan Department Licensing and Regulatory Affairs, though the statute permits private citizens to give away up to 2.5 ounces of marijuana to someone 21 years or older.

One attendee asked if a company could legally sell a person a box of chocolates and give away a gratis bag of marijuana, while another asked if an organization was allowed to offer free samples of marijuana to people who purchase a raffle ticket at a fundraiser, Sepic said. The prosecutor labeled such examples as “subterfuge,” attempts to get around provisions that prevent the unlicensed sale of the substance.

In light of these edge cases, law enforcement officials should strictly enforce the new marijuana laws, and have judges sharply define what is and is not permitted, Sepic said.

“If law enforcement takes a step back and says, ‘the train has left the station on marijuana, we’re going to back off,’ we’re going to have marijuana that is more prevalent, with more exposure to children,” Sepic said. “I don’t think that’s good. And people will start feeling like they can smoke and drive, and that’s not good.”

The prosecutor mentioned that some members of the state prosecutor’s association have discussed bringing test cases in front of the court system to get a clearer definition of the law. Prosecutors in some large metropolitan areas, such as Wayne County, where medical marijuana dispensaries are already operating, do not feel that pushing the envelope is the right approach, though.

“That leaves [Berrien County], in a sense, to our own devices,” Sepic said. “If cases pop up, and we’re in a position that I just stated, that case can move on to the courts.”

Sepic also mentioned to the administration committee that an expansion of Michigan “Move Over” law — which requires drivers to move into the opposite lane or slow down to 10 mph below the posted speed limit when passing emergency vehicles that are stopped on the side of the road — went into effect this week. The list of emergency vehicles covered by the law now includes utility, construction or garbage trucks, Sepic said.

The prosecutor also told the county leaders that he supported the commissioners authorizing a pay study for Berrien County, as one of his assistant prosecutors was leaving at the end of the week to begin working for Ottawa County, the third such of his employees to do so. With Ottawa offering a higher starting and maximum pay rate compared to Berrien, Sepic said he would like the western Michigan community included in a future pay study, in hopes of his office staying competitive with it and other areas of the state in terms of salary.