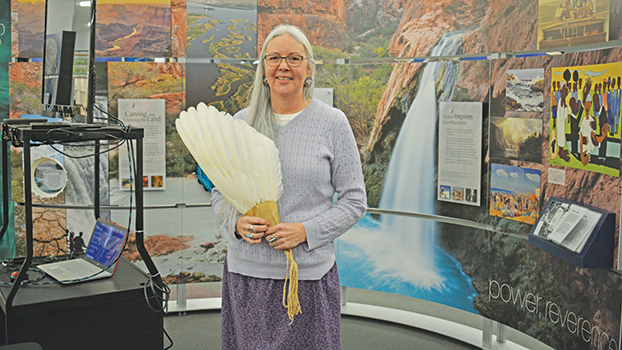 NILES — Thursday evening, Eau Claire resident Andy Jackson held a fan of feathers in her hand as she stood in front of a crowd of people and introduced herself in the Potawatomi language.

“That is something I have to do,” she said before translating for the audience. “[As Potawatomi], we follow our culture and our traditions.”

Jackson, a tribal council member with the Pokagon Band of Potawatomi Indians, presented at the Niles District Library Thursday. Her program, titled “Honor and Protect: Potawatomi Waterways,” was offered as part of Water/Ways, a traveling Smithsonian exhibit that is designed to show people how water has shaped local communities. The exhibit will be at the Niles District Library until Feb. 16.

Jackson has been working to protect water on Potawatomi lands for more than 20 years. Her presentation Thursday discussed the ways that Pokagon women work to protect the water as a natural resource.

“I’m here to talk about our water and what we — as native women — do for our water,” Jackson said. “It is our job as women to care for the water. We are life-givers.”

One of the main things that tribal women do to protect the water is to host an annual Women’s Water Walk each year on the Friday before Labor Day. Jackson said she was tasked with organizing the Women’s Water Walk by Josephine Mandamin, an Anishinaabe elder and water activist involved with the Mother Earth Water Walkers. Since 2003, Josephine has walked the shorelines of all the Great Lakes to thank the water and raise awareness about protecting it.

For the last 11 years, the Pokagon Band has hosted its own water walk in Dowagiac. For the event, Pokagon women and the men that support them host a sunrise ceremony at Gage Street Lake where they “feed” the water with strawberries and oatmeal-like ingredients before embarking on a 13-mile walk to Rodgers Lake. Jackson, the organizer of the event, calls it a “journey of sacrifice.”

Jackson said she is proud of the Women’s Water Walk and the way that it has grown over the years. She added she works to include children in the ceremony so that they can learn young to care for and respect the water.

Before concluding her presentation, Jackson encouraged the audience to take some lessons from the way that Pokagon women respect and protect the water. Though many will not share the same traditions as the Pokagon women, she said that because water is necessary for all people and all life, everyone needs to work together to protect it as a natural resource.