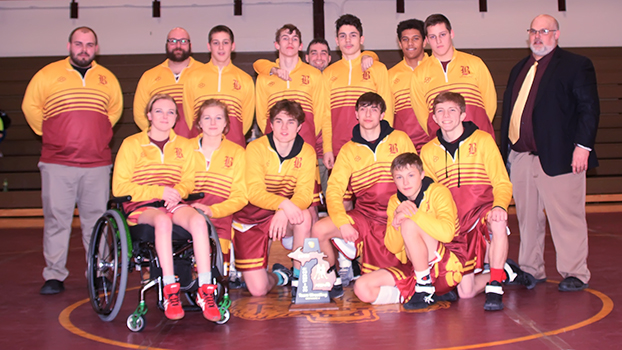 NILES — After a one-year hiatus from being district champions, Brandywine recaptured that title with ease as it defeated Eau Claire 60-6 before knocking off BCS conference foe River Valley 60-18 in the championship Wednesday night.

This is Brandywine’s 13th district title in the last 14 seasons.
In spite of Brandywine (16-17) being short-handed all season, including missing their starting 140 and 160 pounders due to illness for Wednesday’s district action, the Bobcats still managed to take advantage of their young talent and only drop one head-to-head match-up all night.

“We talk all year long that up to this point it’s only preseason,” said veteran Brandywine coach Rex Pomranka following their district title match. “The real season starts now. Up to this point we have worked on our mistakes and we’re coming off a well fought duel with Buchanan Monday. We just kept the momentum going tonight.”

Everything went Brandywine’s way against an injury ridden River Valley team from the coin flip to the match-ups that pursued.

Brandywine’s 135-pound junior, Steven Kendall (32-12), bumped up to 140 to face Chase Ehlert, an opponent he never defeated before in four previous head-to-head matches in his career.

Kendall was taken down early but was able to rebound and put Ehlert to his back several times before pinning him with 18 seconds left in regulation with a comfortable lead.

“On Monday, I pinned an opponent from Buchanan who I had never beaten before, and that just gave me the confidence I needed knowing I can go out and beat anyone if I believe in myself,” Kendall said. “In wrestling, you can’t perform well if you’re not mentally there so my focus was to do what I had to do to help myself out, and it benefited the team. I feel good right now and I’m going to go into this weekend (at individual districts) keeping this mindset to just do my best to keep this momentum rolling.”

Brandywine will travel to Lawton on Saturday for the Division 4 individual district tournament starting at 9 a.m. Returning regional qualifiers are sophomore Hunter Heath (41-2) at 130 and Kendall at 135.

Brandywine will compete at the team regional Wednesday at Watervliet High School against Schoolcraft. White Pigeon and the host Panthers are in the other half of the bracket.