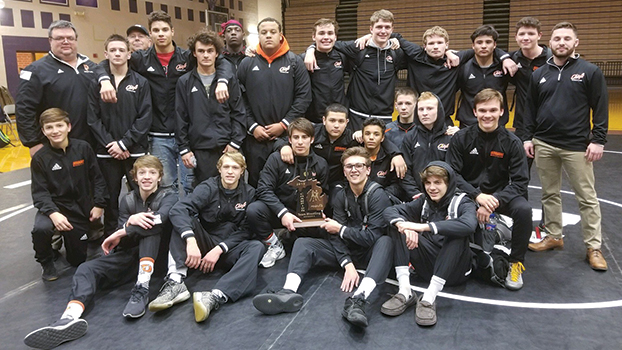 DOWAGIAC — There is work still to be done for the back-to-back Division 3 team district wrestling champions.

Dowagiac picked up its second consecutive title with a 46-34 win over Constantine in the title match at Three Rivers High School Wednesday night.

It was the third straight year that the Chieftains and the Falcons met in the final.

Three years ago, Constantine pulled off the upset of the Chieftains.

But the last two years have gone Dowagiac’s way.

Veteran coach Colin Burandt, who led his team to the Division 3 state quarterfinals last season, was happy with the title, but knows there are things to work on before Wednesday’s regional.

The winner of Thursday night’s Coloma district will host the regional on Wednesday.

The host Comets, South Haven, Buchanan and Berrien Springs were the competitors in Coloma district.

“We are not necessarily satisfied, but it is the next step of getting back to where we want to be,” Burandt said. “That was one of the goals that we set at the beginning of the year.”

Burandt said that the Falcons gave his squad everything it wanted Wednesday night.

“They have a pretty solid team this year,” he said. “They gave us a pretty good dual, and it felt good to come out on top.”

Dowagiac took control of the dual at the 285-pound weight class.

Wyatt Bailey pinned Charles Taylor in 2:41, spurring a five-bout winning streak for the Chieftains, which ended with a Dylan Elmore technical fall against Zane Kruse at 125 pounds.

“Dylan Elmore and Jordan Simpson wrestled extremely well,” Burandt said. “We kind of took over the dual with the stretch from heavyweight to 125.”

Burandt feels good about the potential regional pairs as the Chieftains have seen nearly everyone in the field with the exception of Fennville.

“We have already beat Coloma twice,” he said. “We are thinking Comstock is going to win their district, which is who we would see in the first round. We already beat them 55-24 with four starters out. Then we would see the winner or Allegan or Otsego more than likely.”

While Allegan and Otsego are Wolverine Conference members along with Dowagiac, due to a scheduling quirk, the Chieftains did not wrestle either team head-to-head during the regular season, but did see them in a tournament.

And while Burandt is confident that the team can do well against any of those opponents, he also knows that if his squad does not show up and wrestle at its best, the Chieftains could be sent to the sidelines sooner than they had hoped.

“Anything can happen,” he said. “Last night, we matched up well with Constantine, and we could have put 50 or 60 points on the scoreboard, but they wrestled well and beat us in a couple of matche. We should have won, and it ends up 46-34. So it was closer than it probably should have been.”

Wrestling is scheduled to begin at 6 p.m. Wednesday.