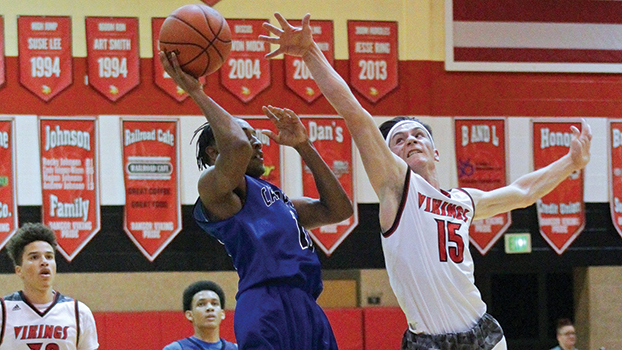 Cassopolis’ Darrion Gatson helped the Rangers pick up a pair of wins on Friday and Tuesday night.(Leader photo/File)

The Cassopolis boys basketball team picked up a pair of wins as it continues its march toward a second consecutive Southwest 10 Conference title.

The game against the Cardinals on Friday night was not pretty according to Cassopolis coach Ricky Evans.

“A sloppy game,” he said. “You can tell both teams haven’t had much time in the gym with the weather. But we got the win. I thought we played the second half better defensively.”

Cassopolis led just 38-36 at halftime, but exploded for 41 second-half points, while holding Bloomingdale to just 24 points.

Tyrese Hunt-Thompson had a monster game for the Rangers as he scored a game-high 36 points. All but three of those points came in the final three quarters. Hunt-Thompson was 10-of-11 from the free throw line, had four 3-points and seven 2-point baskets.

Brayden Saxton and Devon Jennings both reached double figures with 13 and 10 points respectively.

Against the Beavers, Cassopolis (13-1, 11-1 Southwest 10) wasted little time getting ahead as it outscored Eau Claire 28-12 after one quarter.

The Rangers held the Beavers to just two points in the second quarter to turn the game into a rout. Cassopolis took a 55-14 lead into halftime and extended it to 70-20 after three quarters.

Saxton led all scorers with 16 points for the Rangers, who also got 10 points each from Hunt-Thompson and Davonte Goins.

Marquis Hoover was the lone Eau Claire player to reach double digits as he finished with 10 points.

Cassopolis is back in action Friday night as it hosts Marcellus in a Southwest 10 doubleheader. The girls game begins at 6 p.m. with the boys game to follow at approximately 7:30 p.m.