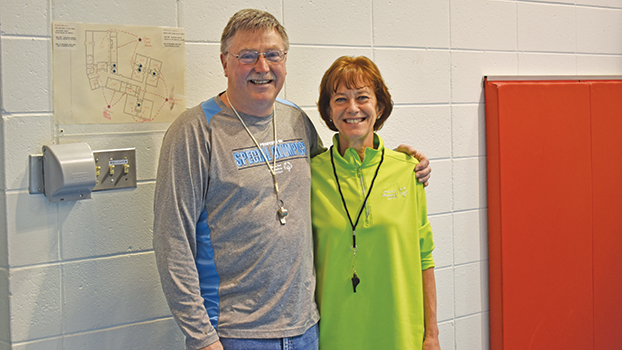 CASSOPOLIS — When Bob and Kelley Nickel went to drop their son Christopher off at his first practice for the Cass County Special Olympics, they were nervous.

Christopher lives with Downs Syndrome, and they fretted over whether he would enjoy himself or if he would succeed.

Now, 16 years later, the couple laughs at the memory, wondering what they were ever worried about. In the time since then, the Nickels have stepped forward to not only be proud parents of a child in the Special Olympics but the coaches leading the team to victory.

“We see that all the time now, what we were like,” Bob said. “[The athletes] come in with their parents unsure, and we can’t pry them away from their parents, but it doesn’t take long for that independence come in, and those kids can’t wait to come to practice.”

The Cass County Special Olympics team is part of area 17 of the Michigan Special Olympics, which services Berrien, Cass and Van Buren counties. Currently, the Special Olympics is in its basketball season, with the 23-person Cass County team — which has players ranging in age from 10 to 47 — having its hopes set on winning the playoffs to take place March 2 in Caledonia, Michigan. If the team wins two playoff games, it will move on to the state championship.

“We have a good chance,” Bob said. “They have as just as good a chance as anyone.”

However, while the Nickels and team members may have their eyes on the prize, the Cass County team is about much more than winning. It is about providing individuals with disabilities the chance to change their lives.

“It’s not really about winning or losing,” Kelley said. “[The athletes] just love to play and to be together. It doesn’t matter if they win. They just bloom, and it really helps them.  It is amazing to watch.”

During one of the team’s biweekly practices, Wade Hardisty, 23, of Vandalia, was decked out from head to toe in gold and purple in honor of the Los Angeles Lakers, the team of LeBron James, his favorite basketball player.

“I love LeBron more than the Lakers,” he said. “I wear the jersey because I love LeBron. … I’m a sports fanatic.”

Ever since he was little, Hardisty has idolized players like James and memorized their stats and plays. He said he enjoys being a part of the Special Olympics team because it allows him to play the same sport as his favorite celebrities.

“It’s helped me a lot to dribble and make baskets,” he said. “I haven’t stopped because I want to keep on playing.”

Hardisty is just one of many players for whom the Special Olympics has given them a chance to play a sport they otherwise would not have been able to.

For Mary Cook, 34, of Cassopolis, the team has been allowing her to play basketball since 1999. Now, she is on the team with 13-year-old son William to help him socialize and find something he loves to do.

Thomas Keene, 25, of Dowagiac, also said he has benefitted from the team, as he loves to play basketball.

As one of the oldest members of the team, Tom Ottinger, 44, of Cassopolis, said the Cass County Special Olympics has been changing his life for more than three decades and that many of his proudest moments have been through the Special Olympics.

In 2013, Ottinger was named the Inspirational Athlete of the Year for a strong desire to do his best, displaying good sportsmanship and exhibiting a positive attitude toward Special Olympics training and competition. In 2014, Ottinger also attended the USA Special Olympics.

“Being on the team means everything to me,” he said. “I love it, and I would do it all again.”

Now, Ottinger said he works to take the younger players on the team under his wing so that they can have the same positive experiences he has had through the program.

Bob and Kelley Nickel have been the coaches of the Cass County team for the last four years. They said they have stuck with the program for so long because they have seen first-hand the way the Special Olympics helps people both through both their players and their son.

Christopher started playing track and field for the Cass County Special Olympics when he was 8 years old. When Bob and Kelley took over as coaches of the Cass County team, Christopher began to play basketball, learning to make a regulation basket over the course of a few years.

Christopher is now 24, and Bob said he has had to make a special shelf just to contain all of Christopher’s medals from the Special Olympics.

“It’s really boosted his self-confidence,” Kelley said. “He feels like he can. No matter what his level of ability is, he feels like a superstar.”

For all their players, Bob and Kelley said being on the team improves their confidence and has made them more independent.

However, the Special Olympics does not only benefit its players.

“[Coaching] does more for us,” Bob said. “Pretty soon, you don’t even look at disability. It’s a game changer.”

Because they learned from their players over the last four years, the Nickels said they hope to take the team to state this year, something that has not happened while they have been coaches. Though they said they do not believe winning is important, Bob and Kelley said they know that going to the championship will make their players happy, and it will be something they have earned.

“They would talk about it forever. They would love it,” Kelley said. “They deserve this recognition. They put as much effort into this as everyone else. They show up for practice, do everything we ask them to do and play hard in the games. During the game, they will play until they are falling down. They will give it their all.”