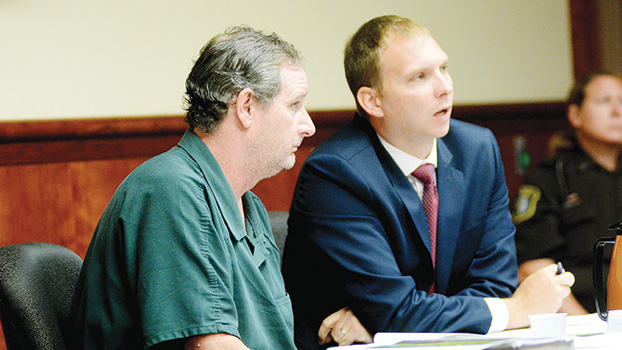 From left, John Lewis and Assistant Public Defender Ryan Seale pictured in court during a past proceeding. (Leader photo/KELSEY HAMMON)

NILES TOWNSHIP — It has been more than a year since 55-year-old Carla Jean Lewis was fatally shot in her Niles Township home. Now, the man accused of her death will stand trial after numerous delays to the trial date.

John Benton Lewis has been charged with premeditated murder. Lewis’ trial will begin Tuesday at the Berrien County Courthouse in St. Joseph and is expected to take about two weeks to complete.

The incident leading to Lewis’ arrest occurred  Aug. 13, 2017. On that day, John had called the police to report a shooting at his home. John told police that two men had broken into the couple’s home and shot at him and his wife while they were in a marijuana grow room in the basement of the home.

When police arrived at the residence,  they found Carla deceased. John was lying nearby uninjured, police said. John also alleged that the men had fled with Carla’s car. Carla’s vehicle was found days later abandoned in a Cass County cornfield.

Lewis was initially arrested for noncompliance with medical marijuana laws. While he was growing the number of plants permitted, police said he allowed other people to tend to his plants, which is not allowed.

As police continued to investigate the case, evidence indicated that Lewis’ story was “not credible,” according to earlier reports from Berrien County Sheriff’s Department Undersheriff Charles Heit.

What’s been reported so far

During a preliminary exam Sept. 25, 2017, presiding Judge Donna Howard listened to testimony from six different witnesses. Howard ruled that there was enough probable cause to send Lewis to trial as a suspect in the case.

A woman who claimed to have had an on-again off-again affair with John was among those who testified. She told the court that John had been asked her to leave her boyfriend. She said in the summer of 2016 John had asked her if their situation would be different if he were a widow. In another conversation, she said he had talked about overdosing Carla with Xanax, though she said she did not think he was serious.

Justin Hicks, a man who had been making renovations to John’s Sevenleaves Compassion Club in Belle Plaza, also testified. Hicks said John asked him to bring some ammunition he had at the store to his residence on Lawndale. Hicks never delivered the ammunition to John and reported the information to police.

At the crime scene, officers found four bullet holes in the wall and Russian steel Tula brand casings that matched the casings Hicks had found in John’s store.

But then-Defense Attorney Carl MacPherson argued that John had appeared consistently shaken and upset about Carla’s death during interviews with authorities. Macpherson also said that no weapon had ever been found and that possessions from a safe appeared to have been stolen during the break-in encounter John described.

Before Aug. 13, John had lived in Niles Township for 12 years. He was a well-known medical marijuana advocate. During Niles’ deliberation of creating a medical marijuana ordinance, John attended city council meetings to show his support for medical marijuana. During one meeting he stood outside with a sign that read: “Like Pot? Me too.”

Following the preliminary exam in 2017, John’s trial date was set for Jan. 9, 2018. However, it was rescheduled a number of times. Both Macpherson and assistant prosecutor Jerry Vigansky asked the judge to extend the trial more than once so that a substantial amount of evidence could be thoroughly reviewed for the case.

The trial was re-scheduled a final time in the summer of 2018. John’s was appointed a new defense attorney, after MacPherson left the position to pursue an out-of-state job opportunity. Edwin Johnson, the new defense attorney, appointed to the case, had undergne surgery shortly before John’s trial was expected to begin. Johnson needed more recovery time to be able to adequately represent the client, which is how the trial, at last, arrived at the upcoming date.

During the trial, Gordon Hosbein will serve as the presiding judge.

Vigansky said a life-size replica of the room where Carla was fatally shot would be utilized during the trial to illustrate the events that unfolded Aug. 13.

Vigansky said he could not say how many witnesses will be called to testify or whether or not Lewis himself will take the stand.

When asked whether or not he felt any anticipation for the trial after numerous extensions, he replied “No comment.”