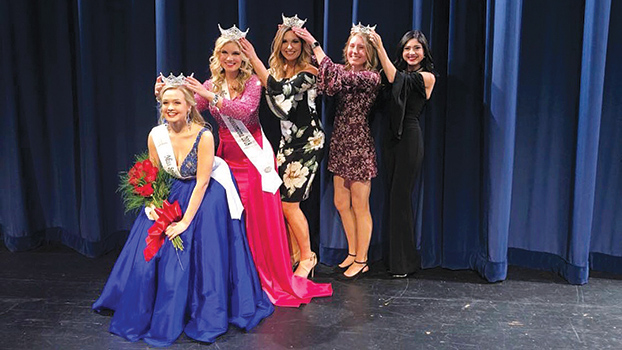 “I was like, ‘I’m so happy I’m in top five,’ and then they put the crown on my head,” Schuhknecht said. “You can see my mouth literally drop. I was like, ‘what is this?’ I did not expect to win.”

Schuhknecht grew up looking up to her local pageant queens and said this influence inevitably led her to try out for Miss Buchanan, where she was crowned first-runner up. As she was awarded the glittering crown and sash, recognizing her as Miss Spirit, she thought of the opportunities to inspire young girls like herself during her reign.

“Miss Buchanan and all these queens have always been like role models to young girls,” Schuhknecht said. “I always looked up to Miss Buchanan and Miss Niles and I always wanted to be that.”

Schuhknecht is the daughter of Michael and Jennifer Schuhknecht. After high school, she plans to attend Michigan State University and study graphic design and creative advertising.

During the competition, pageant contestants must be able to speak and demonstrate grace and poise in front of a large audience. Schuhknecht credits some of her ability to talk in front of a crowd from her time in the Herd – a school spirit group that helps to cheer on Buchanan athletes.

Schuhknecht said she also believes she won because she competed with the mindset to have fun and make friends.

Schuhknecht said the experience competing in local pageants left her with more than a crown and sash.

“I got a lot of interview skills and self-confidence [out of the experience],” Schuhknecht said. “Now I can go into an interview confident.”

Looking to her reign as Miss Spirit, Schuhknecht said she looks forward to the opportunity to compete in the Miss Blossomtime pageant. She also said she could not wait to begin serving her community as Miss Spirit.

“That’s what I am looking forward to the most is just being a role model,” Schuhknecht said. “They [children] see how you act and behave and you have to be mature.”

This story has been updated to reflect official temperature data from the National Weather Service. NILES —  An arctic mass... read more