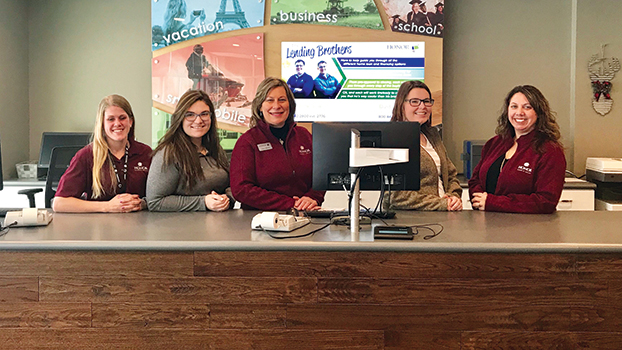 BUCHANAN — Buchanan residents who use Honor Credit Union will no longer have to travel to Niles or Berrien Springs to visit the financial institution.

On Jan. 22, a Buchanan Honor Credit Union branch opened at the former Bucktown Studio site, 117 N. Redbud Trail. A grand opening ceremony is scheduled for March 1. Officials will announce a time at a later date.

Halee Niemi, the public relations specialist for Honor Credit Union, said bank officials wanted to better serve Buchanan customers by opening a local branch. She said bank employees are excited to be able to round out the downtown district.

“We are across the street from the duck pond and Lehman’s, so we are within walking distance of everything downtown which is exciting for us,” Niemi said.

Niemi emphasized that Honor Credit Union has been a community partner with Buchanan, even before the branch established roots in Redbud City, including participating in Bucktown Trivia which raises money for the chamber and giving to Thrill on the Hill.

“[There’s] just a lot of things that we have done in the past, so it just made sense to make it convenient for our Buchanan members and open up a physical branch for them,” Niemi said.

A mixture of three newly hired employees and current employees transferred from another branch will operate the Honor Credit Union.

The full-service bank will offer people the chance to sign up for checking and savings accounts, loans and credit cards. Unlike the other branches, there is no drive-thru available, but there is an ATM at the site. A 24-hour dropbox is also open. Additional experts include a business loan officer and two mortgage loan originators.

“We are really looking forward to just getting to know our members a little more and being able to get out in the community now that we have a physical branch,” Niemi said. “It’s a chance to connect with everybody and see their faces every day without having to separate from the different branches.”

Niemi welcomed Buchanan residents to get to know their new branch. She said people are welcome to grab a cup of coffee and talk with branch operators or come by on Friday for free popcorn.

“They don’t have to have a transaction to get any of that stuff,” Niemi said. “We just want to see everybody stop in.”

The Buchanan Honor Credit Union is open from 9 a.m. to 5 p.m. Monday to Thursday and 9 a.m. to 5:30 p.m. Friday. For more information, people can visit honorcu.com.