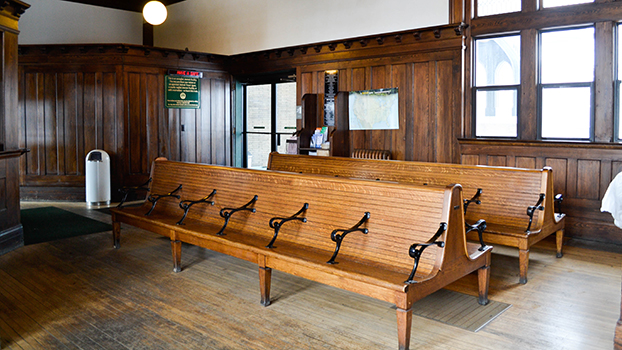 The Dowagiac Train Depot has been opened as a temporary warming station. The depot will be open 24 hours a day until the dangerous cold snap affecting Michigan lifts. (Leader file photo)

DOWAGIAC — As Dowagiac experiences sub-zero temperatures and near-record wind chill this week, the city will be offering its most vulnerable residents shelter from the storm.

Monday evening, the city of Dowagiac temporarily opened the Dowagiac Train Depot, 200 Depot Dr., as a warming station. Until further notice, the station will be open 24 hours a day to provide shelter from the cold. The Dowagiac Police Department, located across the street at city hall, has assigned an officer to check on the station overnight periodically.

“With Michigan under a state of emergency due to sub-zero temperatures, the city decided to open the lobby of the train depot 24 hours a day to serve as a public warming station,” said Vickie Phillipson, programs director for the Dowagiac Chamber of Commerce, which is located inside the depot. “The lobby provides the perfect location for anyone who needs emergency shelter from the elements. This can be someone who needs shelter overnight or those who may find themselves in an emergency situation and cannot get home.”

City Manager Kevin Anderson described the warming station as a small-scale operation that can handle no more than five or six occupants at a time. Due to limited resources, the station will not be serving food or beverages.

“It’s not designed to be able to handle large volumes of people,” he said. “It’s just a very small area that a small handful of people can get out of the weather. The goal and hope for this are to be able to provide a place for a few folks that we know typically spend the nights out on the streets. That’s about all it is set up to do. We know that there are individuals who spend a lot of time on the streets of Dowagiac, and we do not want them to risk hypothermia.”

Because the station can only hold a handful of people, Anderson said the city would work to help individuals find other resources or shelters in the case of an overflow.

At this time, Anderson said he does not know the exact date when the warming station will close, but he expects that by the time the weather warms this weekend, the station will discontinue 24-hour service.

“We are going to let the weather dictate that,” he said.

Though the warming station will be small-scale, both Anderson and Phillipson said they believed that opening the train depot during the cold snap was the right thing to do by the residents of Dowagiac.

“In winter storms such as this, anyone at any time could find themselves in need,” Phillipson said. “We want to make sure we can do everything possible to take care of our own.”

“Anybody who can should be stepping in to do what they can to help,” Anderson said. “We are just one small part of that. … We are just one of many in the city to step forward. The scale in which we are stepping forward is relatively small, but it is what we can do.”