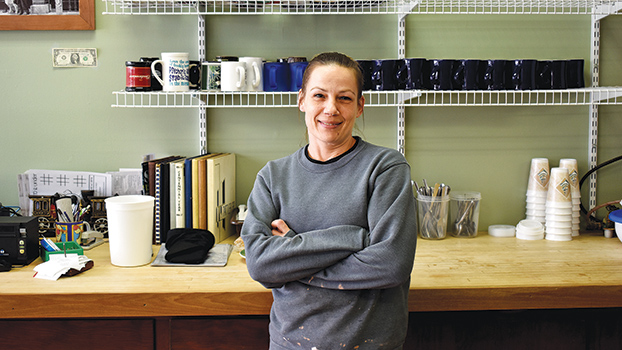 NILES — Viking Grill co-owner Jim Jaynes used to tease cook Ginny Cripe that she would one day own the place and that her name would be plastered on the restaurant building.

“It was kind of a running joke and I was like, ‘no, no, it’s never going to happen,’” Cripe said.

“[We] want to thank all our customers for a great six plus years,” the post read. “Our long-time cook Ginny decided to be her own boss and bought the place. Congratulations !!”

Ginny’s Place serves a variety of breakfast and lunch options. As the new owner, Cripe has vowed to keep much of the menu that regulars have come to know and love the same. Some customer favorites include the Hungry Man breakfast dish, which comes with pancakes, hash browns, eggs and meat. The sloppy Joes are another coveted menu item. Homemade soups and grilled cheese sandwiches also round out the menu.

“Working here for so long, I know what the people like already,” Cripe said. “We just like the atmosphere to be fun and light. We like our regular customers and to see the new faces.”

Cripe also vouched to keep the gravy the same. She said some customers were concerned that she would change the recipe.

“That was one of the things I was asked before I took over: was I going to change the gravy?” Cripe said. “I’m not sure what makes it different, but it is very good. Maybe it’s just that little bit of love we put into it.”

Cripe has created a few new twists to the restaurant. She has added a kids’ menu and will have a daily lunch special available for $8. Customers can find out what the special is by visiting the restaurant’s Facebook page. Cripe said the menu price range is under $10 per person.

“We like to stay low range,” Cripe said. “We like to be like the old mom and pop place: you get what you pay for and get a big plate of food. We don’t want you to leave hungry.”

In addition to a similar menu, regular customers are also likely to see the same faces working around the restaurant. Cripe said she kept the original Viking Grill crew and did not need to hire any additional employees.

Cripe grew up in South Bend. She has lived in Niles for about 11 years.  She and her boyfriend, Bill Gayona, moved to Florida temporarily but decided they missed Niles and moved back. Gayona is helping Cripe to operate the restaurant.

Cripe had her first restaurant job at the age of 15. She has worked at many local restaurants since.

As the owner of Ginny’s Place, she said she hopes to “keep customers smiling.”