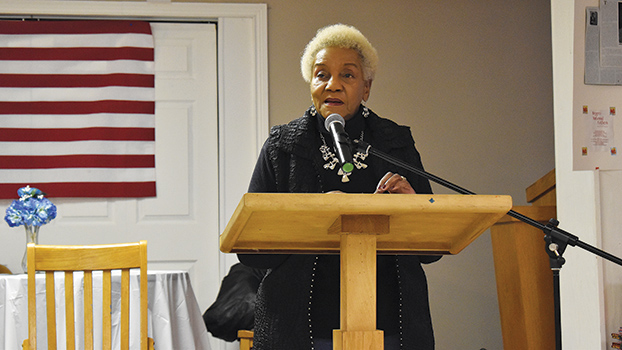 People were invited to have breakfast and listen to city leaders and speakers remind residents how King’s work for human equality continues to be an inspiration.

“I happened to be there during this time during a time of marches and water hoses and dogs. I was there,” she said.

McAfee said she was asked to recall what the holiday means to her. She said she had only to look back on the history she had lived.

McAfee reminded those listening that King’s effort to stand for what is right can teach us all something today.

The Rev. Lynn King, a pastor of Living Faith church in South Bend, is not related to the civil rights leader, but knows his iconic “I Have a Dream” speech by heart.

“I have a dream that my four little children will live in a nation where they will not be judged on the color but by the content of their character,” Lynn quoted. “I have a dream today.”

As Lynn’s voice resonated throughout the church, the words incited cheers and applause throughout.

Singers Ellen Gunn and Alice Fletcher also took to the stage Monday. Gunn sang a rendition of “Lord, Help Me Hold Out.” Fletcher sang “Precious Lord,” which she said was one of King’s favorite songs.

Several city and state leaders attended the event, including State Rep. Brad Paquette, council woman Jessica Nelson, Niles Community Schools Superintendent Dan Applegate and Niles Fire Chief Larry Lamb. Mayor Nick Shelton was also in attendance and addressed the crowd that morning. He said King had posed the question, “Where do we go from here?” in 1967.

“Dr. King was a good man who made a great difference,” Shelton said. “He was a beacon of hope. In my time as mayor, I have seen reflections of that beacon shining brightly in the city of Niles. We are blessed to live in a city, where we too can be hopeful.”

He said King’s quest for human rights continues to remind people today to strive for equality.

“I ask myself, what can I do to make a difference? What can we do as a community? I wonder where do we go from here?” he said.