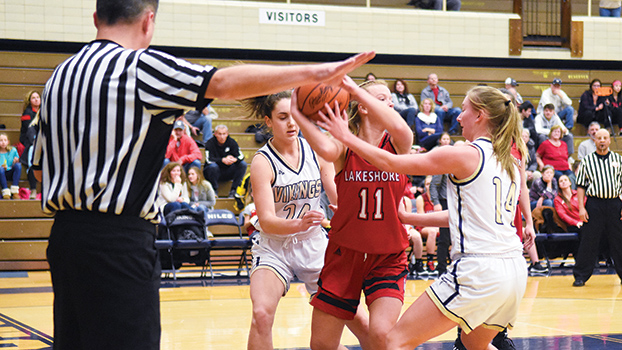 NILES — A mixture of veterans and youth has helped the Niles girls basketball team get off to one of its best starts in recent years.

The Vikings improved to 6-3 overall and 2-2 in the SMAC West Division with a 60-33 victory over visiting Lakeshore Friday night.

Niles has just two seniors — Aynslee Myer and Cassie Klingerman — on its roster to go along with five juniors, two sophomores and two freshmen.

Everyone is playing a part in helping Niles get off to its fast start according to Myer and coach Jessica Johnson.

“We just play more as a team,” Myer said. “Last year we played more as individuals, but this year we play together. Without them (the underclassmen) we would be struggling a little.”

Johnson added that experience has played a big role as well.

“I think it has to do with their confidence,” she said. “Aynslee Myer is stepping up a lot as a senior. We had a great team camp at Grand Valley over the summer and the girls got a chance to bond. I just think we have that team chemistry. They work at it.”

And her younger players?

“I really like our freshmen,” Johnson said. “They come in and they take care of the ball and they do a lot of good things for us.”

A struggling Lakeshore team (1-6, 1-3 SMAC West) kept the game close throughout the first eight minutes of play and trailed by only three points, 14-11, at the break.

Niles, which ran substitutions in and out of the line up all night long, began to wear down the Lancers and slowly pull away.

By halftime, the Vikings led 26-14. Heading into the fourth quarter, the lead was 43-20 and there was no doubt about who would come away the victor.

There are plenty of big games still left on the Vikings’ schedule before the postseason begins in late February, but the Niles players and coaches feel they can go as far as their hard work and effort will take them.

“They have so much potential,” Johnson said. “If they can learn how to work through some of their lows, we can go as far as they like. I think we have a lot of girls who are dedicated to the team and to the sport. They are ready to work hard and they can do well.”

Myer said that what has been the most fun about this season so far is how the team has come together.

“I like the family aspect and playing a lot better than we have the past few years,” she said. “I think we can go pretty far. Maybe the regional finals or more.”

The next test comes tonight as Niles hosts Kalamazoo Central in a non-divisional SMAC contest. The game will have an early start as it tips off at 6:30 p.m.