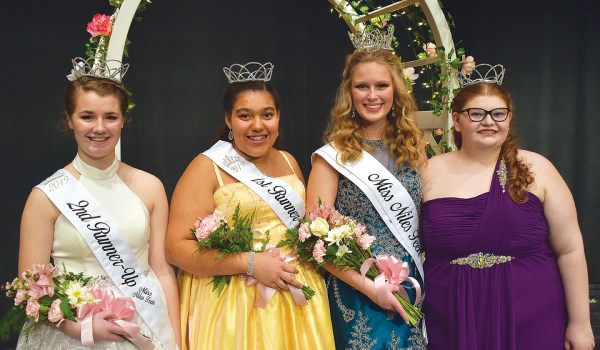 Annabelle Scally, second from right, was crowned Miss Niles Teen 2019 and Miss Congeniality. The rest of her teen court are from left, Natalie Millin, second-runner up; Presley Gogley, first-runner up and Shelby Axline, a competitor. (Leader photo/KELSEY HAMMON) 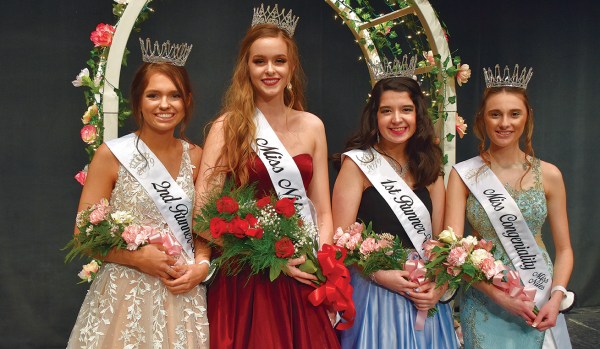 Aliea Bakerson, second from the left, was crowned Miss Niles 2019 Saturday. Posing with her are the 2019 court from left, Kelsey Rager, second-runner up; Abby Kouespert, first-runner up and Mia Frazier, Miss Congeniality. (Leader photo/KELSEY HAMMON)

NILES — Since Aliea Bakerson first saw a friend compete in a scholarship pageant, she dreamed of challenging herself to do the same.

On Saturday, Bakerson lived out her dream and claimed the Miss Niles 2019 title during the annual scholarship pageant at Niles High School.

Bakerson, 17, is the daughter of Michelle and Michael Bakerson. She is a student at the Berrien County Math and Science Center at Andrews University.

She described the moment she was crowned as an “amazing” feeling.

In her reign as Miss Niles, Bakerson said she looks forward to representing her community in the Miss Blossomtime Scholarship pageant which takes place March 11 in Benton Harbor. The regional competition gives southwest Michigan queens the chance to vie for the title.

Additionally, Bakerson said she looks forward to working with her court to give back to the Niles community.

Outside of school, Bakerson is competing in the FIRST Robotics competition. She also enjoys sketching.

Rounding out the 2019 Miss Niles court are Abby Kouespert, first-runner up; Kelsey Rager, second-runner up and Mia Frazier, Miss Congeniality. David Haynes was crowned Mr. Niles. He will compete in Blossomtime for the Mister title.