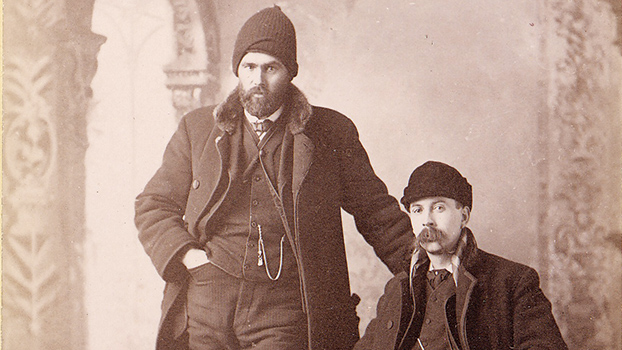 From left, brothers Henry and Lemont Hunter purchased property on the shore of Barron Lake for their ice extraction company. Today, the brothers’ legacy is remembered during the Hunter Ice Festival. (Submitted photo)

NILES — Today more than 100 ice sculptures will transform downtown Niles into a winter wonderland. While the festival, which lasts through Sunday, is a testament to the artistic skills of an elite team of sculptors, it also pays homage to an essential part of Niles history that began with two early entrepreneurs.

Henry and Lemont Hunter moved from Niles to Wisconsin in 1898 to open the Hunter Ice Brothers Company. Situated on 22 acres near the shore of Barron Lake, the commercial operation was the first of its kind and the first industry in Howard Township, according to Niles History Center research.

Mollie Kruck Watson, the assistant director of the Niles History Center, said the festival is a time to remember the Hunter Brothers legacy.

“People come to this festival from all over the region and I think it is really interesting for people to learn the history behind the name of the festival and how we honor the Hunter brothers every year,” Kruck Watson said. “We are the only ones I know of that have an [ice] festival based on a historical industry in the region. I love that we keep that history alive.”

By 1899, The Hunter Ice Brothers Company employed more than 100 people to extract ice “cakes” from the frozen surface of Barron Lake. The business fed a growing demand for refrigeration so as to provide fresh produce, dairy and meat. The Michigan Central Railroad was a major consumer of Hunter Brothers’ ice. The railroad line had tracks located near the ice houses and used the ice to keep food fresh in the dining cars and to refrigerate the agricultural products being transported to other cities and towns. There were 50 boxcar loads a day leaving the surface of the lake.

Unlike the artificial process, extracting the ice was entirely reliant on Mother Nature and the feat was not an easy one to conduct. Ice had to be at least 9 inches thick for the process to begin. Snow could also make the process more difficult because it insulated the ice, making it less likely to freeze.

When the ice was deemed thick enough, a marker plow cut a shallow groove into the ice. The ice was then scored to about half of its thickness and formed into 200-pound cakes that were typically 22 by 22 inches. The ice was then cut free, into a term called floats, and moved toward the ice house. At the shoreline, men separated the cakes and fed them into a channel toward a conveyor, which lifted ice out of the water and into the ice house. The blocks were then covered with hay to provide insulation and to keep them from melting during the summer, the Niles History Center stated. In the company’s 28-year tenure, only one man would fall into the water and die.

Thanks to a loan from the Dowagiac Area History Museum, people will be able to examine the tools used to extract and carve ice taken from Barron Lake, including a giant ice saw, pick and tongs. A display of historical photos will accompany the display and be located at the Fort St. Joseph Museum from 10 a.m. to 3 p.m. Saturday.

Ice from Barron Lake was particularly valuable because a spring stream fed the body of water. This made for pure, clean ice, especially compared with ice operations on the East Coast with water often contaminated with sewage or industrial runoff. The company continued to grow, reaching 160 employees by 1910.

With the advent of mechanical refrigeration beginning to diminish ice extraction, the company adapted and expanded their business model and started selling dairy products, like ice cream and butter. By 1914, they changed their name to the Hunter Ice and Ice Cream Company. The company took pride in using locally-sourced cream from dairy farms in Buchanan and Goshen. Advertisements for the ice cream proclaimed “Every Bite a Delight.” The ice cream was well-known for its signature and creamy flavor. Today, Hunter Ice Cream is sold at the festival, based on a recipe used by the company.

However, more challenges would come for the ice company. In 1919, one of their ice houses burned down and a second devastating fire claimed the second ice house a short time later.

The company tried to make its own artificial ice and built a plant in 1919 at Hickory and Ninth streets, pumping out 25 tons of ice daily.

In 1924, the company was sold to Consumer Ice Company, of Jackson, Michigan. By 1925, almost all of the initial industry had been replaced by artificial ice making. Finally, the Hunter Foundation was formed and still provides community support via donations today.

This history ties in with the festival even more so this year, due to the Smithsonian Water/Ways exhibit which is currently on display. The exhibit and a variety of programs will discuss the way water has shaped the world today. A local exhibition is available at the Niles History Center.

“One important industry we highlight is the Hunter Ice Company because of course Barron Lake we consider to be one of our local Water/Ways,” Kruck Watson said.

While Barron Lake continues to be a landmark, it no longer produces ice for commercial use and people no longer depend on the process to keep their food and beverages cold. Still, the festival continues to mark the company’s legacy.

Kruck Watson said she looks forward to people learning more about the company and how local water fed Niles industry during this year’s festival.