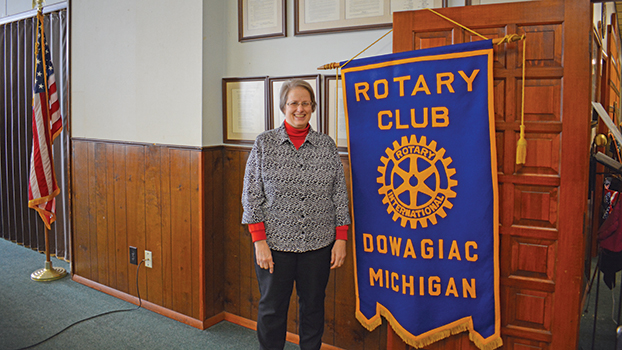 DOWAGIAC — A local organization will be adding a fresh face to its leadership.

Thursday, the Dowagiac Rotary Club announced that a change in leadership is coming to the club. Long-time member Melody Wallace was named president-elect of the club. She will be taking the place of departing president John Seculoff. Her term will begin in July.

Wallace has been a member of the Dowagiac Rotary Club since 2013. She said she initially attended a meeting at the urging of a friend but ended up joining because the community of the club inspired her.

“I love hearing the speakers,” she said. “I love learning more about our community. [Rotarians] do great service work in the community.”

Wallace said she was approached by Seculoff several weeks ago about taking over the position of president, but did not definitively decide to take on the responsibility until recently.

She said what finally made her decide to take the position was the realization that she could be of service both to the club and the community.

“I’m relieved to have made a decision,” Wallace said Thursday. “I’m excited, and I want to be of service.”

Currently, Wallace said she has no set plans for her presidency, but will attend President Elect Training in March, where she said she is excited to learn more about what the position entails. She also said she would be meeting with current president Seculoff to learn more about the specific responsibilities of being the president of the Dowagiac Rotary Club.

While she does not have any set plans as of yet, Wallace did say she had ideas. One idea that she said she wants to build on is following the motto of “go and be an inspiration.”

“We are a service organization, but I think one of my ideas is how can we add value to the people we come in contact with every day,” she said. “Rotary does have the opportunity to be an inspiration in this town, so I see that as part of the president-elect’s duties. It is looking for ways that we can be a benefit to the town and own the town — or maybe the county, as we have so many people that come from all over Cass [County].”

Seculoff said Thursday that he knows Wallace is the right person for the job and that she will take the club in a fresh direction. He added that her energy would lend itself well to a leadership position.

“I couldn’t be leaving [the club] in better hands,” he said.