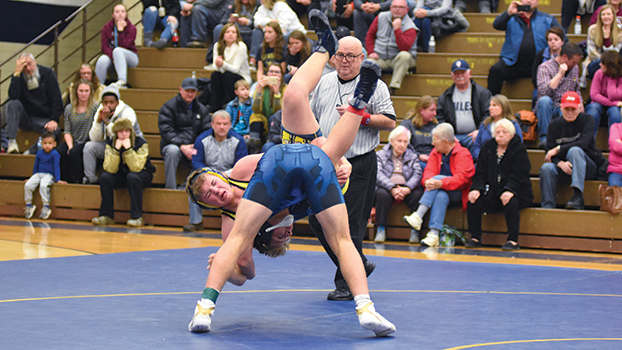 NILES — A gaudy record and a No. 7 ranking in Division 2 are nice things to have, but for Niles wrestling coach Todd Hesson those are just window dressing.

The Vikings improved their season record to 13-2 and their SMAC West Division mark to 4-0 with a 52-18 victory over visiting Mattawan Wednesday night.

Things did not go exactly as planned for Niles in the match, and Hesson knows that things could have turned out differently.

After Kade Wagley gave the Vikings a 6-0 lead following the opening bout at 145 pounds, the Wildcats took advantage of some lackluster wrestling by Niles to open up a 12-6 lead.

But a major decision victory by Dawson Bruckner at 189 pounds and four consecutive pins from 215 and 112 pounds sealed the deal for Niles, which might have been guilty of looking forward to this weekend’s Lowell Super Duals.

The veteran Niles coach knows that his team has plenty to work on over the next couple of weeks before the postseason gets under way.

The Vikings will be looking to reclaim their spot as the top area team in Division 2 when districts begin Feb. 6 in St. Joseph.

Lakeshore knocked Niles out of the top spot last year and the two appear to be on a collision course once again.

“Distracted is more of the word I would use,” Hesson said of his team’s performance Wednesday night. “We have a lot to work on. We were fortunate. That score is very deceiving. It could have very easily went in a different direction if you retrace some of the things that happened. We just have a lot of things to work on in a lot of areas. I just do not know how else to put it.”

Hesson did admit that his team may have been looking ahead to the Lowell tournament on Saturday that features a field filled with top-ranked wrestling teams.

Niles will face host Lowell, the No. 2-ranked team in Division 2 in the opening round.

“Lowell invited us up last season and I thought it was good to get a little separation from Lakeshore,” Hesson said. “We see them so much at the end of the season. Thought it would help us break out of the routine of seeing them so often. Saturday is a small, but extremely tough tournament. Allendale and Niles are the two lowest ranked teams.

This is exactly what we need: tough matches, as a team and individuals. Its great preparation for the upcoming postseason.”

Dowagiac continues to roll in Wolverine