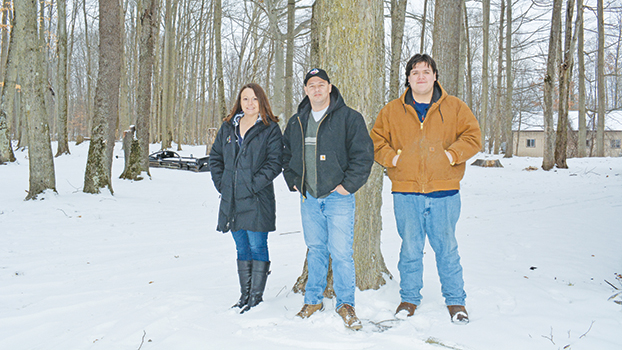 DOWAGIAC — Despite a chill that crystallized his breath into white puffs of air, Jefferson Ballew was all smiles Wednesday morning as he leaned over a large metal contraption, showing off the way the machine worked to turn sap from Dowagiac trees into sugar.

“This is what our evaporators look like contemporarily,” he said, leaning down to display how wood is fed into the machine to boil the sap. “Traditionally, there would have been copper or clay vessels. Each family would have made their own clay pots.”

Clearly passionate about the entire process, Ballew said he was excited to share more of his knowledge at an event hosted by the Pokagon Band of Potawatomi Indians this weekend.

The Pokagon Band will host its fifth annual sugar season kick off 10 a.m. Saturday at the tribe’s Rodgers Lake Pavilion.

The event, which celebrates the season of harvesting sap from trees on tribal property to turn into sugar and syrup, will feature a pancake breakfast served with real maple syrup harvested during last year’s sugar season. The event will introduce the community to the sugar harvesting process and show attendees the equipment used. Organizers will also discuss the need for the during the sugar season and how they can get involved. Gifts and incentives will be given to people who volunteer the most hours throughout the season at the end of sugar season feast in April.

“This is kind of a way to get the community involved with the process,” said Nicole Holloway, cultural activities coordinator with the Pokagon Band. “This is a growing thing, and there is more interest year after year.”

Though this is the fifth year, the Pokagon Band as a government entity has taken part in the sugar season, harvesting sap from the trees to turn into sugar has long been a Native American tradition.

“There have been families that have been doing this for all of time,” Ballew, who is co-lead of the sugar bush lead project with Wahsnoday Pamp, said. “It is one of our ways of taking care of the earth. It is about coming together as a community to survive. That is what this teaches us.”

Now, Holloway said that the Pokagon Band has taken up harvesting during the sugar season to teach the community about the process and how to keep the tradition alive. As part of this, students with the tribe’s Zagbëgon Academy will be participating once a week during the sugar season to learn about the process and Potawatomi language associated with it.

“We want the community to learn to do these things and want to do it from themselves,” Holloway said. “The biggest part of this is getting people to come back to the old ways and learn so that these traditions can stay alive for the next generation. We want people to know the old stories, know how to do it and know that you can go up to a maple tree, not add anything to it, and get something you can turn into sugar and syrup. All it takes is sap, a fire and a lot of hard work.”

Both Holloway and Ballew said they would encourage anyone within the Pokagon Band or the greater Dowagiac community to attend the sugar season kickoff Saturday or volunteer during sugar season.

“This is a tradition that is a part of our history, and we want the community to be a part of that,” Holloway said.

For more information or to volunteer during the sugar season, contact Holloway at (269) 783-3513.