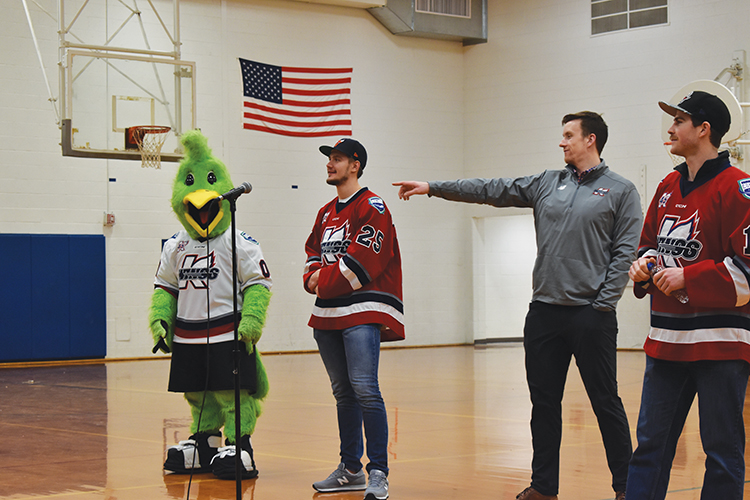 CASSOPOLIS — On Jan. 9, Sam Adams Elementary School students had four special visitors from out of town. Although the visitors are most commonly seen speeding around on ice, chasing pucks, or doing dance moves to entertain crowds, on Wednesday they stood in the Sam Adams gymnasium to answer questions and pose for pictures.

Chris Collins, Aleksandr Mikulovich and Slappy, the Wings mascot, were accompanied by Isaac Berky, the Wings public relations director, to follow up with Sam Adams students after the education game in November.

“I think it’s a good opportunity for students to see professional sports up close. There’s a lot of students who don’t get that opportunity very often,” said Mark McGlothlen of the education game.

McGlothlen is a third grade teacher at Sam Adams, but along with being a teacher, he is a 20-year season ticket holder for the Kalamazoo Wings. As an educator and a hockey lover, McGlothlen was drawn not only to his undying devotion to his hometown hockey team, but also to the team’s community outreach and educational opportunities.

“The K-wings are big on community outreach. They like going to the schools, and they like having the opportunity to meet the children who come out to watch them at the games. It’s give and take. We come and watch them, they come and see us,” McGlothlen said.

The education game in November that several classes from Sam Adams attended was a $5 per person for the game, the cost for which was mostly covered for Sam Adams students. It was also the third game the Cassopolis elementary school attended since McGlothlen joined the staff. From the Wings’ perspective, the game was more than an opportunity to share a hockey experience. It was an opportunity to get students out of the monotony of the classroom.

“It’s a good opportunity. I think it’s a chance for a lot of these kids to get out and get to a game for a lot of kids that might not necessarily get there,” Berky said of the education game. “It opens the door for kids and lets kids have a fun experience outside of the classroom. It’s a lot better than sitting in a classroom looking at textbooks. It changes the pace and it’s a fun day.”

The same was true of the Jan. 9 visit to Sam Adams. Toward the end of the school day, classes that attended the November game were able to meet two of the players they saw on the ice, as well as the beloved mascot, Slappy. Students asked Collins and Mikulovich questions on topics like where they are from, when they learned to skate, who their favorite teams are and how many fights they’ve been in on the ice. Collins and Mikulovich are both in their first season with the Wings, but were happy to share hockey experiences they had before joining the Kalamazoo team.

“It’s exciting to meet the students. It’s good for us to switch up our schedule and do something for fans,” Mikulovich said.

As hockey lovers and players since early childhood, Collins and Mikulovich were pleased to encourage physical activity and athletics to the students at Sam Adams. Slappy was pleased just to bust a few dance moves, pass out hugs and do a few pushups.