Dowagiac picks up another victory 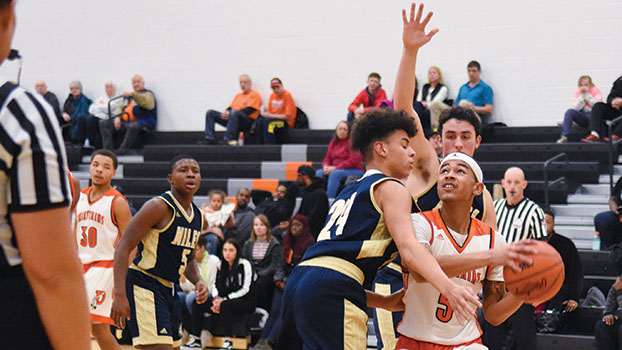 The Chieftains, winners of three of their last four games, showed little mercy against visiting Niles, which has dropped five consecutive games and is the middle of a shake up to its roster.

Dowagiac (5-6) has won three consecutive home games due mainly to its pressure defense.

Niles, which now has a roster filled with underclassmen, could not handle the pressure and was forced into numerous turnovers that led to easy baskets for the Chieftains.

Dowagiac led 16-3 after one quarter, with the lone Niles basket coming basket by Ethan Alkire and a free throw from Kendall Chrismon, who wound up having a solid game for the Vikings.

The relentless pressure did not ease up in the second quarter as Dowagiac scored 13 more points and took a 29-14 advantage into the locker room at the intermission.

A 21-point third quarter turned the game into a rout as Dowagiac led 50-22 with eight minutes remaining in the contest.

“We really couldn’t handle it anywhere,” said first-year Niles coach Tyler Dendy about the Chieftain full-court pressure. “They kind of got into our heads and sped us up. We cannot emulate their size and athleticism in practice. I did not think it was going to be like this, but this is a learning experience for us.”

Chrismon was a bright spot for the Vikings the entire night.

He was the one Niles player who did not seem to be overwhelmed by the Dowagiac pressure and remained aggressive and attacked the basket.

Chrismon finished with a team-high 14 points. He was the lone Niles player to reach double figures.

“I thought he was very aggressive and was not intimidated whatsoever,” Dendy said. “I think some of our other guys got intimidated, but that is what happens when you play so many younger guys. He wanted to make plays and I think he was kind of successful because he had no fear.”

Dowagiac was led by senior Shaquan Stanback, who scored a game-high 23 points.

The Chieftains also got 13 points from Dashawn Brooks, a season-high 12 points from Andrew McIntosh and 11 points from Trae Brookins.

The Chieftains continue to shoot the ball well from the outside as it connected on another nine 3-points led by McIntosh and Stanback with three each.

The Vikings return to SMAC West Division action as they host Lakeshore Friday night. Tipoff is set for approximately 7 p.m.

Dowagiac heads back to Wolverine Conference South Division play as it heads to Three Rivers for a 7:15 p.m. start.